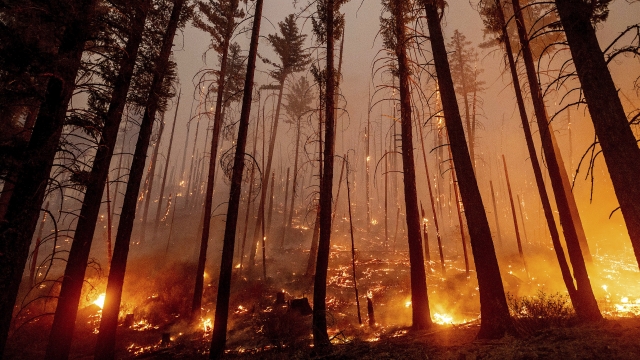 SMS
Dixie Wildfire Threatens More Homes In Northern California
By Robin Dich
By Robin Dich
August 16, 2021
The Dixie Fire is one of more than 100 large wildfires burning in the western United States and has scorched nearly 867 square miles of land.

Thousands of homes in Northern California remain threatened by the nation's largest wildfire as unstable weather creates a high danger of new blazes erupting across the West.

Weekend thunderstorms across the northern Sierra didn't produce much rain, instead whipping up winds and unleashing lightning strikes that that bedeviled the more than 6,000 firefighters trying to contain the month-old Dixie Fire amid temperatures forecast to top 100 degrees Fahrenheit.

Gusts of up to 50 mph on Saturday pushed flames closer to Janesville, a town of about 1,500 people just east of Greenville, the small gold rush-era community decimated by the fire 10 days ago. 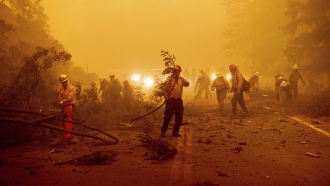 The Dixie Fire was the largest among more than 100 big blazes burning in more than a dozen states in the West, a region seared by drought and hot, bone-dry weather that turned forests, brushlands, meadows and pastures into tinder.

The U.S. Forest Service said it is operating in crisis mode, fully deploying firefighters and maxing out its support system. Around 21,000 federal firefighters are on the ground, more than double the number sent to contain forest fires at this time a year ago.

The Dixie Fire has ravaged nearly 867 square miles – an area the size of Tokyo, or more than twice the size of Indianapolis. It was 31 percent contained as of Sunday.

More than 1,000 homes and businesses have been destroyed and nearly 15,000 structures were still under threat from the Dixie fire, whose cause has not been determined.

Pacific Gas and Electric has said it may have been sparked when a tree fell on its power line.