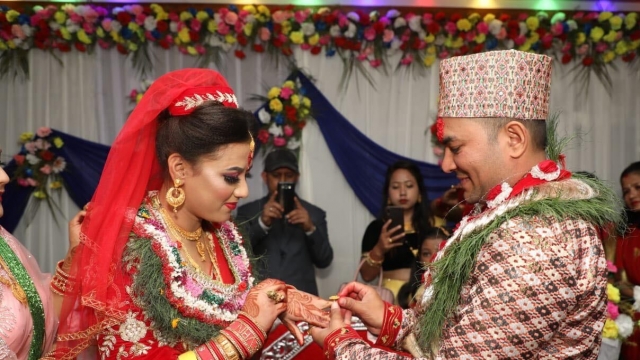 SMS
With Deadline Approaching, Thousands of Diversity Visa Winners Sue
By Austin Landis
By Austin Landis
August 10, 2020
Each year, the U.S. makes 55,000 diversity visas available to people selected from a worldwide lottery of millions. But they expire each fiscal year.

A federal judge in Washington, D.C says there’s no time to waste for thousands of people promised a new life in the U.S. Each year, up to 55,000 are chosen for diversity visas, randomly selected out of a pool of about 14 million applicants around the world. Now, the 2020 winners risk losing the chance at a visa entirely after a policy shift from President Trump.

Jeevan Poudel and his wife, Sujyana, had been preparing to move to the U.S. since the moment they got married in December. He's a teacher and Sujyana is a registered nurse, and they both hoped to advance their careers in the United States.

Poudel says the U.S. diversity visa lottery is a coveted ticket where he lives in Bhaktapur, Nepal, and he's applied year after year. “I applied 7 or 8 times and was never selected," Poudel told Newsy. "Then luckily this year, I was."

Jeevan was first notified that he won in May 2019, along with at least 55,000 others. But a few months ago, his excitement vanished.

“That was a nightmare. All that hope ruined, destroyed," Poudel said.

President Trump issued an order in April putting a pause on almost all visa issuances, including diversity visas. The stated intention of the order was to make more jobs available for Americans. He later extended the freeze through the end of this year.

But diversity visa lottery selections don’t carry over from year to year. They have to be issued by the end of the fiscal year — September 30 — or they disappear.

“We just don’t have the luxury of briefing this out over the course of weeks or months," he said.

Jessica Vaughn, of the anti-immigration think tank Center for Immigration Studies, says there's no hurry to make a decision on diversity visas, despite the looming deadline.

"After all, in this particular visa category, it's people who, by definition, don't have family sponsors or employment sponsors," Vaughan told Newsy. "The visa lottery program is one of the least important in all of our legal immigration programs."

She says the administration is within its rights to delay these visas, partly because this year's freeze was meant "to make sure that the millions of Americans who lost their jobs because of the economic shutdown have first crack at jobs...before any new immigrants arrive."

One of the lawyers representing visa winners tells Newsy they’re hoping to have the visa deadline extended by another year — through September 30, 2021 — to give lottery winners more time.

That includes Jeevan and Sujyana. Instead, Jeevan says that after joining the lawsuit, his case status went from "administrative processing" to “refused.” Still, he finds hope in the lawsuit and its potential to help him and thousands of other visa winners.

“We are very much hopeful the American judiciary system will preserve our dream," he said.

Judge Mehta isn't expected to issue a ruling until the end of August, at the earliest, after a hearing on August 27. That would leave just a month before the chance at a diversity visa expires for tens of thousands of winners.