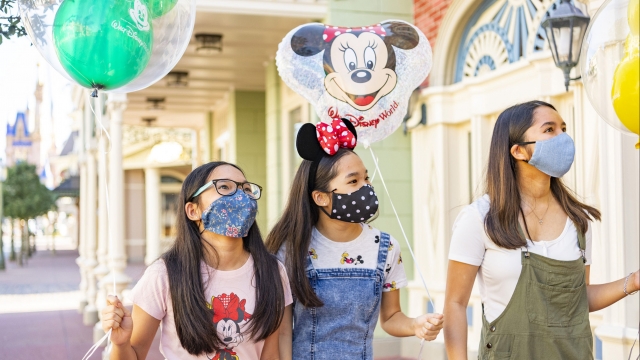 For the past four months the "Most Magical Place On Earth" has seemed to be a world away — closed due to the coronavirus pandemic.

That changes on Saturday as the Walt Disney World Resort in Orlando reopens its doors to welcome guests back. However, despite additional safety measures, some experts and workers are worried as coronavirus cases in Florida continue to spike.

Theme park expert and University of South Carolina professor Scott Smith says Disney is one of the top companies to test the "new normal" of the pandemic. He's a former Disney employee and says guests should manage their expectations.

"If you are a guest that wants to come back and see the parade and the characters and almost treat the experience like nothing has happened, this is probably not the time for you to come."

Parades and character meet-and-greets are among the Disney staples that have been suspended because of the pandemic. Fireworks and most indoor shows have been canceled as well to prevent crowds from forming. Guests and employees will be required to wear masks and have their temperatures taken. All will be encouraged to wash their hands, sanitize and socially distance.

"Those are real steps that are being taken to try to facilitate as safe of a ramp-up as possible."

Matt Hollis is president of the Service Trades Council Union, which represents some 43,000 Disney employees. His organization has been working with the company to develop ways to protect workers from the virus. Employees are being taught how to self-assess for COVID-19, and they're guaranteed sick pay if they test positive.

"What we're tasked with doing is reaching realistic solutions on behalf of the cast members as they return to work."

A petition created by a Disney employee has garnered around 19,000 signatures from people who want the reopening to be delayed.

Two Disney World employees — who asked not to be identified publicly — told Newsy they're concerned for their health. One of them, RJ, is worried that going back to work will lead to more infections and cited recent spikes in daily reported cases in Florida.

"If I'm carrying this disease and I don't know I have it, I give it to one of them and I kill them. It would be no different than if I pointed a gun at them, and I would have to live with that for the rest of my life. That really bothers me."

When Newsy asked Walt Disney World about these concerns, a spokesperson referred us to a blog post written by Disney's chief medical officer.

In the post, Dr. Pamela Hymel says Disney is committed to the well-being of visitors and workers. She said there will be increased cleaning and disinfection at the parks and says Disney has based its health and safety measures on guidance from the CDC, the U.S. Travel Association and other health experts.

"From increased cleaning and disinfecting across our parks and resorts, to updated health and safety policies, we have reimagined the Disney experience so we can all enjoy the magic responsibly. We implemented our health and safety measures after considering the guidance of government and local health authorities, including the Centers for Disease Control and Prevention (CDC), in addition to the U.S. Travel Association and Disney’s team of health experts."

“I can understand people's fear of the spikes, but we're doing what we're supposed to do. … I'm glad to be back to work. And I hope that everybody's glad to come back and have a little magic in their lives after three months of blah.”

"I think you can go to Walt Disney World and have a wonderful experience even with the safety restrictions that are in place there. But if you’re not willing to do that, stay home and plan your trip for another time."

Editor's note: Bailey Vogt worked as an attractions operator at Disney World in 2016. Neither Bailey nor Newsy is affiliated with Disney.