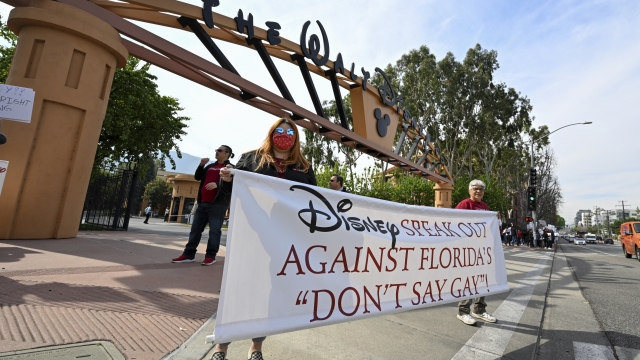 SMS
Disney Workers To Walk Out In Protest Of Florida LGBTQ School Bill
By Associated Press
By Associated Press
March 18, 2022
Workers plan to walk out because of CEO Bob Chapek's slow response to publicly denounce what critics have dubbed the "Don't Say Gay" bill.

Disney workers are planning walkouts during their breaks every day this week to protest CEO Bob Chapek’s slow response in publicly criticizing Florida legislation that critics have dubbed the “Don’t Say Gay” bill.

The act of protest will culminate next Tuesday with a general walkout by LGBTQ workers and their supporters at Disney worksites in California, Florida and elsewhere, the group of Disney employees said this week on their website. 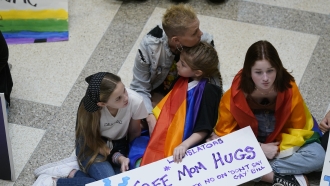 Organizers asked Disney workers to check in online with their plans to participate in the full-scale walkout for next week. “We must make sure we have large enough numbers to be successful," they said.

Statements by Disney leadership over the Florida legislation “have utterly failed to match the magnitude of the threat to LGBTQIA+ safety represented by this legislation," the group said.

The bill bars instruction on “sexual orientation or gender identity” in kindergarten through third grade. Republican lawmakers pushing the legislation had argued that parents, not teachers, should be the ones talking to their children about gender issues during their early formative years. The legislation has attracted scrutiny from President Joe Biden, who called it “hateful,” as well as other Democrats who argue it demonizes LGBTQ people. 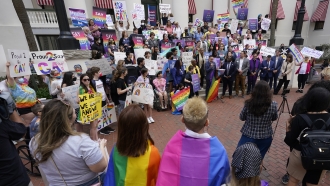 As the state's largest private-sector employer — Walt Disney World outside Orlando had more than 75,000 workers before the coronavirus pandemic — Disney has contributed huge amounts of money to Florida’s political parties and politicians and has wielded incredible influence on the state’s government.

At the beginning of last week, Chapek sent a message to Disney workers affirming the company's support for LGBTQ rights but also saying that corporate statements often don’t do much to change minds and can be “weaponized” by either side.

Rather than make an early public statement against the legislation, company officials had been working behind the scenes with Florida lawmakers “to achieve a better outcome,” but they hadn’t been successful, despite “our longstanding relationships with those lawmakers,” Chapek told Disney shareholders a few days later.

With his public responses being panned by some Disney workers and supporters, Chapek last Friday apologized and said the company was pausing all political donations in Florida.

“I truly believe we are an infinitely better and stronger company because of our LGBTQ+ community," Chapek said in a message to Disney workers. “I missed the mark in this case but am an ally you can count on — and I will be an outspoken champion for the protections, visibility, and opportunity you deserve."