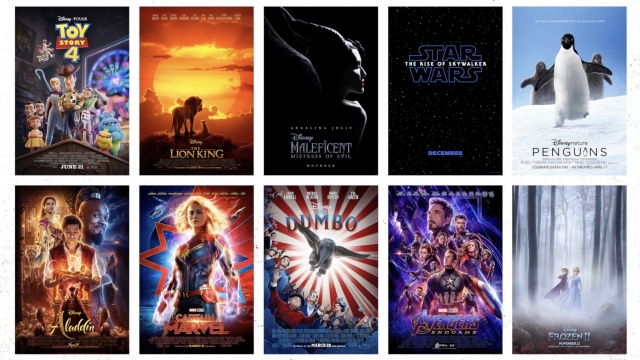 SMS
Disney's 2019 Movie Schedule Ensured It Was Going To Make Billions
By Katherine Biek
By Katherine Biek
July 31, 2019
Disney has grossed more than $7.67 billion worldwide at the box office in 2019. But it sort of stacked the deck in its favor when scheduling releases.
SHOW TRANSCRIPT

By now, you may have heard that Disney's grossed more than $7.67 billion worldwide at the box office this year — setting a new all-time record.

But in scheduling its movie slate for the year, did the House of Mouse stack the deck in its favor, so to speak?

Absolutely. With the release of its latest film, "The Lion King," in mid-July, Disney's already dropped two-thirds of the films it's produced for the year.

And four of those flicks — "Captain Marvel," "Aladdin," "The Lion King" and "Avengers: Endgame" — grossed more than $1 billion each. The latter also dethroned "Avatar" as the top-grossing movie of all time with almost $2.8 billion in global ticket sales.

As for the remainder of the year, Disney still has a "Maleficent" sequel, "Frozen 2" and another "Star Wars" film on deck.

It's also worth noting that Disney's global box office record reportedly does not include money being made off Fox titles it inherited in its acquisition of 20th Century Fox.

The deal increased Disney's domestic market share to more than 40% — that's more than three times as much as its next-closest competitor, Warner Bros., holds.

While no Fox-produced film is raking in the kind of money the Disney ones are, a Forbes analyst predicts they'll at least help the studio earn more than $10 billion at the global box office by the end of the year.