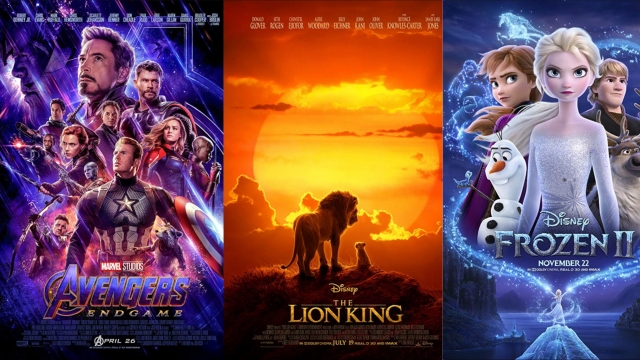 SMS
Disney Earned More Than $11B At The Global Box Office In 2019
By Katherine Biek
By Katherine Biek
January 3, 2020
That's a new record for the film industry as a whole. The previous record of $7.6 billion had been set by the House of Mouse back in 2016.
SHOW TRANSCRIPT

Disney is once again the king of the worldwide box office — this time to the tune of more than $11 billion.

That 2019 total is a new record for the film industry as a whole. The previous record of $7.6 billion had been set by the House of Mouse back in 2016.

Disney's 2019 total was helped by the fact that it had seven of the 10 highest-grossing films at the global box office — including "Avengers: Endgame," which blew everyone else out of the water with a cool $2.8 billion.

An unprecedented number of Disney films also gained access to the billion-dollar club, like the live-action remakes of "Aladdin" and "The Lion King," as well as "Frozen II" and "Toy Story 4."

Disney's latest "Star Wars" film will surely also gross more than $1 billion, but since it was released in late December, most of its haul will go toward the studio's 2020 box office total.

But industry analysts say it's unlikely that any studio will come close to making that much money again anytime soon. Even Disney's 2020 slate is jam-packed with original offerings, meaning there's not an already guaranteed audience for the content like there is with franchises and sequels.

Because Disney acquired 21st Century Fox partway through 2019, it kept a separate box office tally for its Fox films. But grosses for the two studios will be combined in 2020.