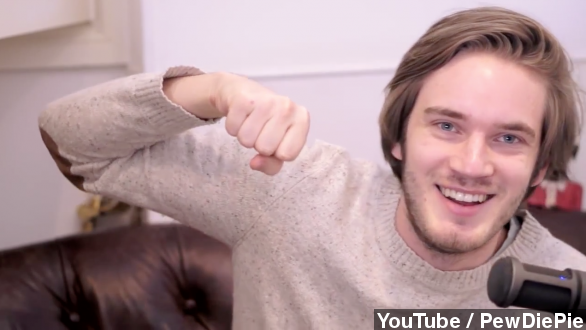 By Adam Falk
March 25, 2014
Disney announced it will acquire Maker Studios. Reports say the buy could get Disney closer to millennial audiences and give Maker a larger platform.
SHOW TRANSCRIPT

Disney announced it will acquire YouTube video network Maker Studios for $500 million. If that sounds like a lot for YouTube, take a look at Maker's numbers. The online studio is home to more than 55,000 channels, generating about 5.5 billion views per month on YouTube alone.

Maybe you recognize this guy? He goes by PewDiePie, and he's one of YouTube's biggest stars. (YouTube / PewDiePie)

"Epic Rap Battles" is another popular show under the Maker — or soon-to-be-Disney — umbrella. (YouTube / ERB)

The acquisition also comes with an additional $450 million, if videos like those meet growth targets. Now, if none of those clips looked familiar, you're probably not the eyes Disney's trying to attract with this deal anyway.

Variety reports, "The deal makes a lot of strategic sense, as [Disney] strives to remain connected to younger audiences that are increasingly consuming content on YouTube and other digital outlets."

In its release, Disney describes the union as an "ideal partnership."

Beyond grabbing a millennial audience with videos like this one, the company will "gain advanced technology and business intelligence capability regarding consumers' discovery and interaction with short-form online videos." (Via Maker Studios)

And Maker gets a safety net. As you can guess, turning a profit on YouTube is a challenge. (Via Maker Studios)

Most individual creators don't see the success of PewDiePie, who sometimes gets millions of views per video.

According to The Verge, "Partnering with Disney could help it combat this by expanding beyond Google's video site."

That is, depending on what Disney decides to do with Maker. Re/code has been talking about this potential buy for a couple of weeks now. And the way a writer there sees it, Disney has a few options.

The one with "some intrinsic logic to it" would be for Disney to use Maker as a farm for talent. It could harvest the talent already there. Then, ideally it would be seen as an attractive option for the next big Web star.

Or, as The New York Times article suggests, use Maker as pipeline to young, Web-based consumers. Brent Weinstein with United Talent Agency says, "Look at what Maker has done for Epic Rap Battles and Snoop, and imagine what they can do for Iron Man, Mickey and Yoda."

But then again, does the Star Wars franchise really need help from YouTube?

We can't really say what exactly will happen. Disney could just leave Maker alone, throw a few resources at it and hope it returns a greater profit.

Reports indicate the team will remain in Culver City, Calif., and answer not to Disney's troubled Web and video game division, but instead to the CFO of Disney. (Via Maker Studios)