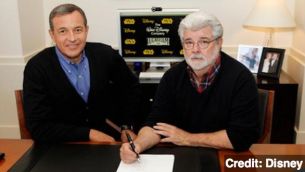 A galaxy far, far away meets the happiest place on Earth.

The Walt Disney Company on Tuesday became the new owner of Lucasfilm, the company owned by filmmaker George Lucas that holds popular franchises such as Star Wars and Indiana Jones.

Lucas sold his company and all the film rights that came with it for $4.05 billion, saying Tuesday:

“It's now time for me to pass Star Wars on to a new generation of filmmakers. I've always believed that Star Wars could live beyond me, and I thought it was important to set up the transition during my lifetime.”

Disney announced another piece of big news for Star Wars fans Tuesday, a seventh episode of the iconic film series with a release date set for 2015.

Lucas is set to stay on as a creative consultant, but Disney says directing duties will fall to someone else for the first time since 1983’s Return of the Jedi.

“Admiral, we have incoming ships in sector 7.”

One potential candidate to replace Lucas at the helm of the next Star Wars film could be Brad Bird — Disney’s Academy Award winning director of Pixar films like Up and The Incredibles, along with 2011’s “Mission Impossible: Ghost Protocol.”

An online movement to give him a shot at the next episode was already gaining huge momentum on Twitter Tuesday afternoon.

Not to be forgotten, Indiana Jones will also pass into Disney’s hands with the Lucasfilm purchase, though there’s no talk yet of restarting that franchise under new management.

The big buy also opens the door for crossover merchandising between Star Wars and Indiana Jones and the other major properties owned by Disney  — that includes Pixar, the maker of Toy Story and Cars — and Marvel, the studio behind this spring’s The Avengers.

TONY STARK: “No offense, but I don’t play well with others.”

Kathleen Kennedy, who often works with Lucas’ friend Steven Spielberg and has served as Lucasfilm’s co-chairperson, has agreed to manage the Star Wars franchise under Disney. The company says fans can expect new films in theaters every 2 or 3 years after 2015’s episode seven.