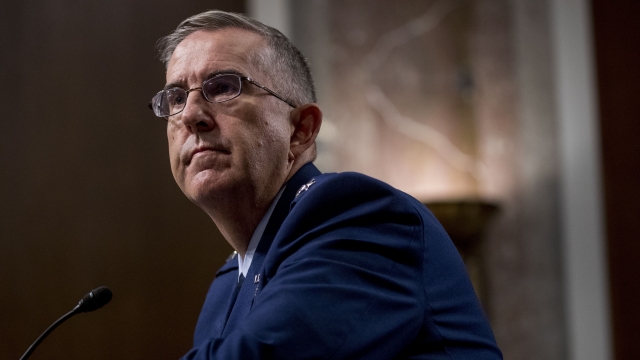 SMS
Case Continues Against One of Highest-Ranking Military Officers
By Victoria Jones
By Victoria Jones
October 23, 2020
Gen. John Hyten — the vice chairman of the Joint Chiefs of Staff — was accused of sexually assaulting a female officer in 2017.
SHOW TRANSCRIPT

On Thursday, Judge Michael W. Fitzgerald rejected the defense's motions to dismiss the case and to move it to Nebraska, where the officer commanded a base at the time of the alleged assault.

The judge's ruling is notable because usually a case like this would be decided on within the military's justice system.

Gen. Hyten, who is the vice chairman of the Joint Chiefs of Staff, was accused of sexually assaulting a female officer in 2017 while on a trip to California.

The allegation came forward after Hyten's nomination to the position, but an Air Force investigation last year cleared him of misconduct accusations — citing insufficient evidence — before his Senate confirmation.