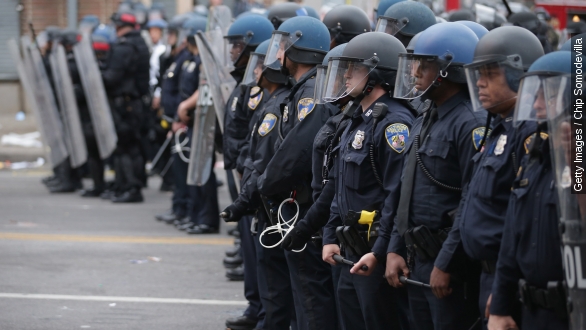 SMS
Discharged Firearm Spurs False Baltimore PD Shooting Reports
By Matt Picht
By Matt Picht
May 4, 2015
False reports of a police shooting in the troubled city of Baltimore Monday turned out to be a discharged firearm and no one was injured.
SHOW TRANSCRIPT

It started with this report from Fox News correspondent Mike Tobin, who claimed to have witnessed Baltimore police chasing down and shooting someone at the corner of North and Pennsylvania avenues.

Tobin told Shepard Smith: "You did have a gun on the scene. You have one individual who has been shot. He did not appear to be dead when they took him away in the ambulance, but he didn't look to be in good shape."

Riot police quickly converged on the scene of the incident, as did a crowd of residents. The city has been wracked with protests after 25-year-old Freddie Gray died after being injured while in police custody last month.

However, Baltimore police strongly contested Monday's reports, saying the man reported shot was not injured when he was taken into custody, and the only shots fired at the scene came from a weapon the man had in his possession.

An officer told reporters: "The police never discharged any weapons. ... He is not injured. Nowhere on his body does he have a gunshot wound."

Which lead to this apology from Fox's Shepard Smith:

"A bunch of people who are trained at this sort of thing saw it, and it wasn't real. And now something has been created there that is wrong and unnecessary."

An investigation into the incident is still ongoing, but police say the subject has been taken into custody for a weapon-related charge.