A Disaster Group Is Helping Animals Left Behind After Hurricane Ian 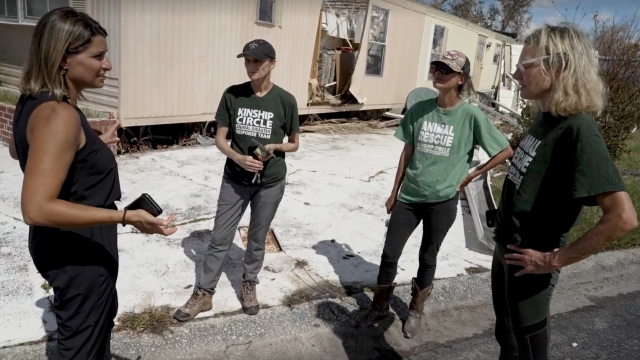 A disaster response group has been in Florida helping rescue animals that have been left behind. They provide food, refuge and medical assistance.

When natural disaster strikes, many people leave behind their homes. Others head straight into the devastation.

"You don't know what you're going to find. And every single disaster is different," said Deatsch. "If you are able to help one animal, just one, the whole trip is worth it."

The damage from hurricane Ian feels familiar and personal to Cheri Deatsch, who lives in New Orleans.

"This was very Katrina-esque for me. Houses displaced off of foundations. Boats piled on top of each other," said Deatsch.

The 2005 storm is what started her work in animal disaster aid with the nonprofit Kinship Circle.

"Sorry, I still get teary eyed about it even now. And it's been 17 years," said Deatsch.

Katrina was Missy Hargraves' first mission too. She's a volunteer with the group. The two met on later hurricanes.

"We worked hurricane Harvey together. And South Carolina, which was hurricane Matthew," said Hargraves.

On this trip, they met Florida native Sarah Llerena. It's her first animal rescue mission in her hometown.

Some stops are as simple as opening a can of cat food for an animal left behind with the hope their owners will return.

"I don't want to send someone's animal to an animal control office or to a kill shelter, there's no guarantee," said Deatsch.

Hurricane Ian was the third-deadliest storm to hit the U.S. mainland this century.

Other stops provide hurricane victims with pet food and supplies, and some stops mean heartbreak.

"If I lose five animals, maybe my job that day was just to give them a better death. To let them know that someone still cared. So they didn't die alone in a pile of rubble, or at least someone was there holding them. Maybe that's all I can do," said Deatsch.

Earlier in the week the trio came across a very sick dog who needed help, but they said that unlike other disasters they've worked there was no animal disaster shelter set up.

"That was our first question on the ground. 'Where is the shelter?' Where do we bring the animals if we find animals? The dog we brought in a couple of days ago, who didn't make it? We were just scrambling to find that care for this dog. Because normally, at those staging areas, they have volunteer vets also who are there working," said Deatsch.

They found another vet, but it was too late.

"They lost everything and the dog," said Hargraves.

"She literally would have — she would have died in a pile of hurricane rubble in the 90 degree heat. So we — she got put to sleep humanely. So like I said, all you can do sometimes. I just wanted them to know," said Deatsch.

They returned with guinea pig food in hand and one more message, with the help of a neighbor girl to translate.

"I needed to come here today. Probably more for me than for them but I did want them to know that we really tried," said Deatsch.

On the ground, these volunteers worry the need for these services will only increase as climate change intensifies hurricane destruction.

But no matter how bad the storms and the aftermath get, you can count on finding these women in the rubble.

"I will do it every single year. I will be out here with Kinship Circle for every storm, wherever it is, because the animals need it and I could not sit at home knowing that there's an animal somewhere that might be drowning — or that might be starving," said Deatsch.