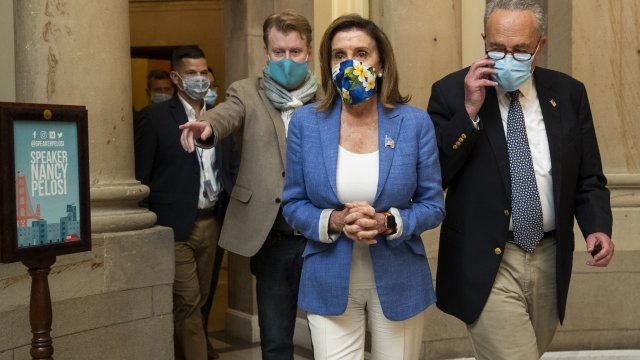 They said there is a way to go before a package could be passed, an impasse putting 30 million unemployed Americans in a waiting game.

Pelosi and Mnuchin both outlined their reservations in separate interviews on ABC's "This Week."

Pelosi said she wants a comprehensive health plan to combat the virus to be part of the plan.

However, Mnuchin said the White House doesn't want to saddle future generations with the potential debt created by the Democratic plan.

“The Democrats right now are insisting on over $1 trillion to state and local governments, and that’s something we’re not going to do,” Mnuchin said.

One sticking point is a weekly $600 federal unemployment benefit paid by the federal government, assistance the Democrats say is necessary to keep families afloat and Republicans say is too much and discouraging some people from returning to work.

Senate Majority Leader Mitch McConnell was home in Kentucky this weekend and did not participate in the negotiations. The sides will be continuing meetings Monday — discussing a relief package which could include stimulus checks and providing more government support for the cost of personal protective equipment, which Mnuchin says has "bipartisan support."