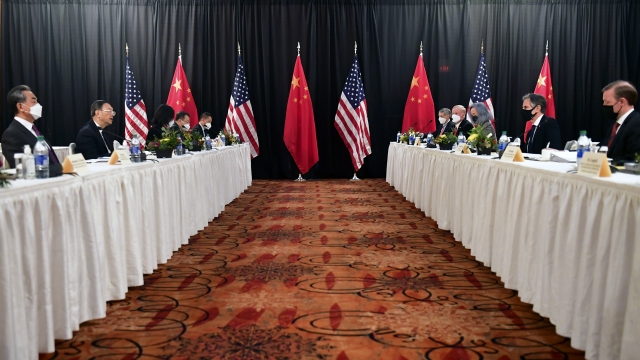 SMS
U.S., China Open Bilateral Talks On A Contentious Note
By Matt Simon
By Matt Simon
March 19, 2021
During the first U.S.-China talks of the Biden administration, each side took turns criticizing the other.
SHOW TRANSCRIPT

President Biden reacting to a stunning scene in Alaska. Top diplomats from China and the United States unexpectedly squaring off, trading direct barbs as cameras rolled.

"The alternative to a rules-based order is a world in which might makes right and winners take all," said Secretary of State Antony Blinken.

The Chinese delegation notably surprised as Secretary of State Antony Blinken blasted China in his opening remarks focusing on every sensitive issue in a single sentence.

"We'll also discuss our deep concerns with actions by China, including in Xinjiang, Hong Kong, Taiwan, cyberattacks on the United States, economic coercion toward our allies," Blinken said.

China’s top diplomats going off script to fire back.

"Many people within the United States actually have little confidence in the democracy of the United States," said Yang Jiechi, China's foreign affairs chief. "According to opinion polls, the leaders of China have the wide support of the Chinese people," he added.

The conversation getting even more intense. At one point, American cameras left as scheduled but Chinese cameras stayed, and the Chinese delegation implied Blinken was scared of keeping them in, asking if this is what freedom of the press looks like. Blinken gestured to aides to bring the cameras back in and the barbs continued.

The fallout felt around the globe, including in Beijing, where the foreign affairs spokesperson conceded a “strong smell of gunpowder,” claiming confrontation was not the plan. All this an indication that the world’s most important bilateral relationship is frayed and possibly getting worse.