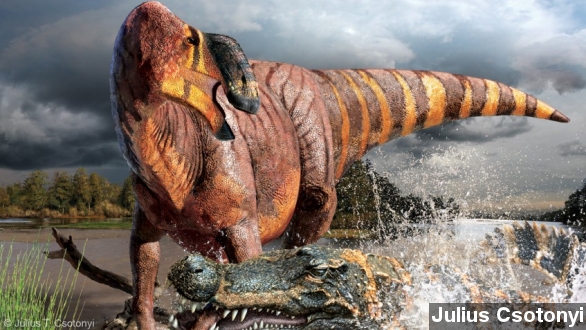 Rhinorex condrupus had a nose so big it was dubbed "King Nose," but scientists aren't sure what purpose it served.

It seems like dinosaurs have been in the news a fair bit lately, but the newest dino to be discovered is beating out competitors by a nose.

This is Rhinorex condrupus, which was recently discovered in Utah. And that thing on the front of its head? That's its nose.

Rhinorex was actually dug up in the 1990s, but it was never put together. It was just kept in storage at Brigham Young University. Finally, two scientists decided to piece the fossils together, and that's when they realized they had a new species on their hands.

Rhinorex was a Hadrosaur, also known as a duckbill dinosaur, who were known for their distinct and widely varied crests and lived during the Cretacious period, some 75 million years ago.

While the scientists say they're unsure exactly what purpose the duckbills' crests served, they've theorized the bills, which were actually extended nasal cavities, could be used as a resonating chamber for mating and warning calls. (Video via Discovery)

Those theories are backed up by the inner structure of the hadrosaurs' bills, which the Witmer Lab at Ohio State University reports was filled with loops and chambers that would have produced a powerful, deep sound.

In the case of Rhinorex, the scientists say its giant schnoz might have been used to attract mates, which might seem counter intuitive — but then, Adrien Brody and Barbra Streisand have done alright for themselves...

And Rhinorex would've beat out the competition if that were the case. As LiveScience reports, it had the biggest nasal opening relative to its size of all its fellow duckbills.

The researchers also said comparing Rhinorex to other Hadrosaurs found a couple hundred miles to the south has helped paint a clearer picture of the Cretaceous period's geography.