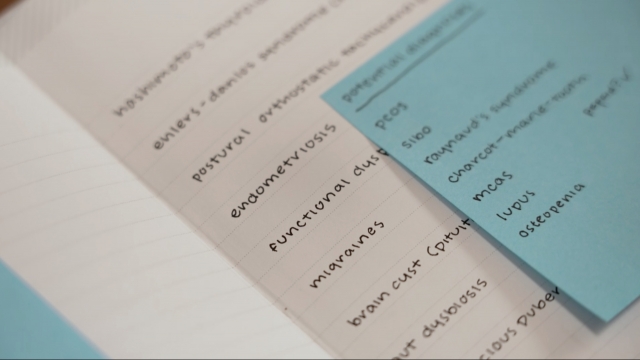 You wouldn't know it from the outside.

Kayla, a college student in Nashville, Tennessee, is battling a disorder called endometriosis. It's a condition where tissue that normally lines the inside of the uterus grows outside the uterus.

"A lot of disability is invisible, especially something like this," Kayla said.

She chose not to share her last name with us because she's worried it'll make finding a job tough.

"When people find out that you're sick chronically, you don't know how they're going to react," Kayla continued. "I have this page in my planner is where I keep all of my like diagnoses ... There's endometriosis."

"Endometriosis affects everybody differently," Kayla said. "For me, it causes debilitating pain, and it usually flares up all of my other conditions."

"There are a couple of theories about why endometriosis happens in some women versus others, but we don't know which of those theories is correct," Harvey said.

One in ten women have it, but experts think it could be more common than that.

"Endometriosis affects many millions of women," Harvey continued. "It is, we think, very underdiagnosed. And women in general, we know from research studies, may go years before finally getting a diagnosis and appropriate management of their disease."

Kayla was diagnosed in July 2020 through laparoscopic surgery.

"And it was not good when they looked inside," she said. "I had it in 15 locations. It almost perforated my bowel."

Although everyone's experience is different, her surgery ended up making her pain worse.

"It's just indescribable, insurmountable pain through my legs and through my hips. I can't stand, I collapse," Kayla said. "If I skip doses on some of these, I can end up in the ER, which I can't afford."

She says she's tried everything to manage the pain — morphine, opioids, 11-13 different birth controls, even a natural hormone called progesterone.

"I am doing nothing to manage it because there is nothing left," Kayla said.

For women of color, it can take even longer to get diagnosed.

"I think there's likely not enough awareness among providers to listen to symptoms that women are having and to suggest to be sent to an endometriosis specialist or to have further evaluation," Harvey said.

"I've been privileged — and I have white privilege — and because of all of these things, I'm more likely to be believed," Kayla said. "But even then, it took me seven years to get diagnosed."

She says the experience caused her medical trauma.

"When somebody doesn't believe you ... it hurts you and you're told that you're crazy or that it's a mental health problem or that it's not as bad as you think it is," Kayla said. "What are you supposed to do? It feels so hopeless."

She finds comfort in knowing she's not alone.

Celebrities like Amy Schumer have shared their endometriosis experience, Schumer went so far as to remove her uterus entirely.

While there's no cure, hysterectomy surgery, like the one Schumer had in September, is often the last resort to try to alleviate pain.

"I'm feeling really hopeful and I'm really glad that I did it," Schumer said.

"Just finding someone who experiences things the way that you do — even if you know your lives are different — it makes the load a little bit lighter," Kayla said.

Her advice to others: Find a doctor you trust.

"Find a doctor who listens to you and cares about you genuinely and listen to your body. Trust your body," Kayla said. "If something feels wrong, something is probably wrong."