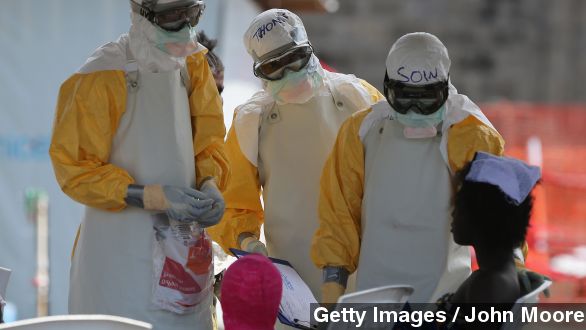 SMS
Did Sierra Leone's Misplaced Ebola Funds Cause More Deaths?
By Jill Ornitz
By Jill Ornitz
February 13, 2015
An audit revealed Sierra Leone lost track of 30 percent of its funds to stop Ebola. Confirmed cases of the disease have spiked in the last few weeks.
SHOW TRANSCRIPT

The fight against Ebola in Sierra Leone has been severely hindered by bad bookkeeping, according to the country's national audit service.

The audit revealed that roughly 30 percent of the country's Ebola funds are unaccounted for — that translates to 5.7 million dollars. (Video via CCTV)

And the audit doesn't indicate much confidence in where that money has gone. It reads, "Monies that have been set aside for the purpose of combating the Ebola outbreak may have been used for unintended purposes, thereby slowing the government's response to eradicate the virus."

The document also warned that writing checks to individuals, rather than organizations, may have created, "leeway for such payments to be converted into personal use."

The audit didn't include information about grants or loans provided by international organizations. But as of December 31, Bloomberg reports estimates indicate only a third of the 2.9 billion dollars donated by international groups has reached the affected nations. (Video via The Telegraph)

The news of financial mismanagement comes as the country has seen a two-week uptick in confirmed Ebola cases.

And Sky News reports a tourist hot spot in the western region of Sierra Leone's capital, Freetown, has been placed under a 21-day quarantine after the death of a local, Ebola-positive fisherman. (Video via YouTube / FiveCreature)

The quarantine comes less than a month after the country's president lifted stringent travel bans with the hope of boosting economic recovery. (Video via Euronews)

But recent medical progress gives hope that Sierra Leone's luck will change. NBC reports ZMapp, the Ebola drug given to U.S. doctor Kent Brantly over the summer, is ready to be shipped and tested in Liberia.

The U.S. is also conducting trials of an Ebola vaccine in Liberia and is expected to start a trial soon in Sierra Leone.