Did Russia Destroy Steve Jobs Monument Because Cook Is Gay? 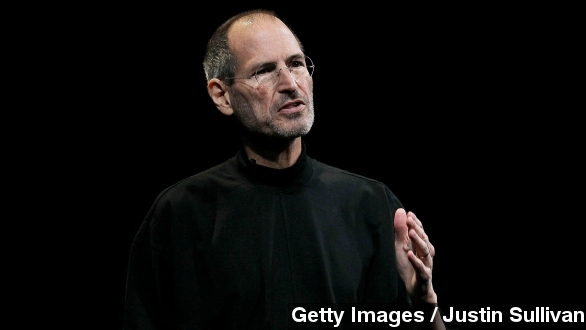 SMS
Did Russia Destroy Steve Jobs Monument Because Cook Is Gay?
By Steven Sparkman
By Steven Sparkman
November 3, 2014
The bizarre story of a six-foot iPhone that was removed due to Russia's anti-gay laws is hard to verify, but it's not so far fetched.
SHOW TRANSCRIPT

A bizarre story made the rounds Monday that a monument to legendary Apple co-founder Steve Jobs had run afoul of Russia's strict gay propaganda ban — because Jobs' successor is gay.

It's a strange tale: workers dismantled the St. Petersburg monument, which took the form of a six-foot-tall iPhone, the day after current Apple CEO Tim Cook published this article in Businessweek, saying, "I’m proud to be gay, and I consider being gay among the greatest gifts God has given me."

Monday, Russian outlets began reporting that the company that sponsored the monument had torn it down because of Cook's sexual orientation and because Apple cooperates with U.S. intelligence agencies.

The sexual orientation angle got the most coverage. A press release supposedly coming from the company sponsoring the monument quoted its president, seen here at the monument's unveiling last year, railing against Cook, saying he had encouraged sodomy. (Video via YouTube / Diplomatrutube)

The monument itself was actually pretty impressive. Reports at the time said it had a touchscreen displaying Jobs' biography, could take high-resolution photographs of visitors, could withstand sub-zero temperatures and was even a Wi-Fi hotspot.

It was a pretty fitting memorial: a high-tech monument to a tech guru installed at a tech university. So the news that it was torn down because of a tangential link to a gay man was pretty widely mocked by Western press.

For instance, New York Magazine wrote: "Did you know that you can catch the gay from a monument to a company founder whose successor happens to be gay? Neither did we."

But additional reports from Russian outlets started to make the story a little less cut and dry. RT called it a hoax.

Another state-run outlet quoted a university official as saying the school was told the monument would be removed well before Cook's article was published.

And a St. Petersburg site quoted students saying the monument had been malfunctioning and was in need of repair.

Plus, it's still not clear whether the comments actually came from the company, either. The press release could only be found on the website of a Moscow radio station.

The story caught on primarily because it's not so far-fetched. Russia's recent laws prohibit any open expression of homosexuality, and activists within the country say it's becoming dangerous for gay people.

CHANNEL 4: "Attacks like this one are becoming more common. The attackers are a group of extremist vigilantes who prey on suspected gays, beat them up and accuse them of being pedophiles."

Plus, Cook's coming out has actually sparked harsh rhetoric already. An extreme anti-gay lawmaker in Russia said Cook should be banned from the country because, as a gay man, he would bring "the Ebola virus, aids, [and] gonorrhea."

So you can see why the monument story sounds believable to Westerners. The company has yet to clarify its intentions either on its website or on any social media accounts.