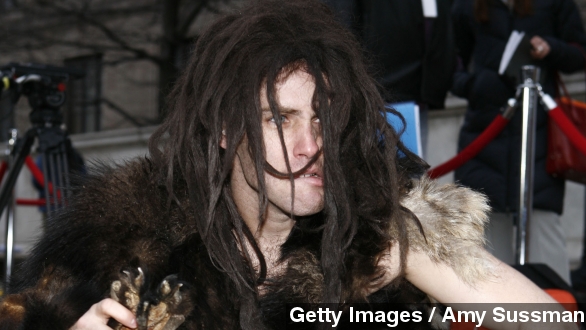 By Christine Slusser
September 2, 2014
Artwork found in a Gibraltar cave that was possibly done by Neanderthals suggests they may have been smarter than we all thought.
SHOW TRANSCRIPT

When we think of Neanderthals, we often picture long-haired, shaggy-looking prehistoric people with the intelligence of a buffalo.

But new artwork found in a Gibraltar cave suggests otherwise, and it looks very much like a game we're all familiar with. New Scientist reports no one can say for sure if the artwork was just "Idle doodle ... Stone Age tic-tac-toe, or the first evidence of Neanderthal art."

Regardless of what it is, it's making the Internet chatter because it would mean Neanderthals, our ancient ancestors, possibly weren't as primitive as we all thought.

"Scientists say it could be the most compelling evidence yet for Neanderthal art." (Video via BBC)

BBC explains that's because art is abstract thought, which "was long considered to be the exclusive preserve of our own species. ... [and] the geometric pattern identified in Gibraltar ... was uncovered beneath undisturbed sediments that have also yielded Neanderthal tools."

So, artwork AND tools? Score one for the Neanderthals, zero for all those scientists who ever doubted them.

And like all fine art, even if it is the upwards of 39,000 years old, it already has its critics.

"It just looks like a bunch of lines, I don't know if I'd call it artwork."

​"Well, they're Neanderthals for gosh sakes!" (Video via WEAR)

Nobody can catch a break these days. Scientific American says scientists have been excavating the cave since the late 1980s. The discovery was published in the journal PNAS.

And if this is evidence that Neanderthals were smarter than we all thought, it wouldn't be the first. Other studies have sought to prove they were actually just as smart as modern humans, but that would be a whole other story.

This video includes an image from Getty Images / Amy Sussman.