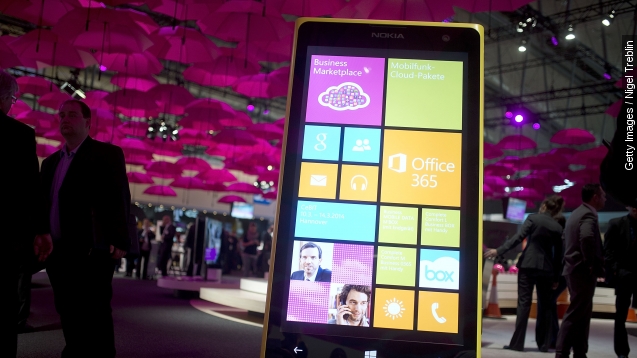 When Steve Ballmer was CEO of Microsoft, he made a — let's call it "bold" — move in acquiring Nokia's mobile phone arm for roughly $7.9 billion.

We learned Wednesday that current CEO Satya Nadella is writing off that purchase to the tune of $7.6 billion. (Video via Microsoft)

It’s hard to think of a clearer way a company could admit it screwed up. But Microsoft hasn't given up on Windows Phone.

The Wall Street Journal reports Nadella sent an email to employees saying the company would not be discontinuing phone production. Instead "Microsoft intends to focus its efforts in phones on three areas: business users, value customers and 'flagship devices.'"

But the company is also cutting some 7,800 jobs related to its phone business. And let's not forget Microsoft also laid off 18,000 workers just last year.

With all these cuts, who’s left to focus on phones? We're not really sure, but the company's recent agreement with smartphone maker Kyocera could help.

In a press release, Microsoft said, "The new agreement enables the companies to use a broader range of each other’s technologies in their respective products through a patent cross license."

Kyocera has never been a heavy-hitter in the smartphone world, so it's likely Windows smartphones won't bear that name anytime soon. But the company's tech is respectable, and it's been around a long time. (Video via CNET)

Microsoft can also continue using the Nokia name — which is currently featured proudly on all its Lumia models.

If you're a Windows Phone user, don't fear: Windows will still support your phone, and you'll still get that shiny new OS later this year.

In the future, though, your upgrade options will probably be a bit more slim.