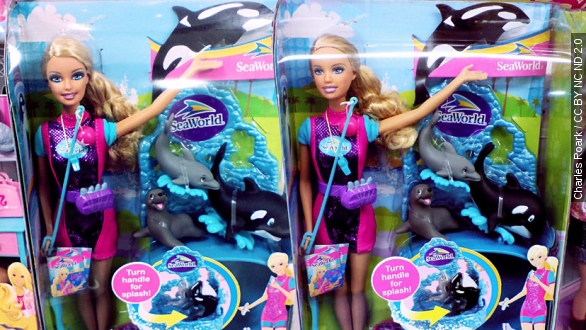 The controversy surrounding SeaWorld has bled over into toy world — specifically, the world of Barbie.

Animal rights activists, who allege SeaWorld's use of orca whales for entertainment constitutes animal cruelty, have hailed the decision. (Video via KGTV)

But for Mattel, it might be less about animal rights and more part of a brand revival for Barbie.

In recent years, Barbie's been edged out by competitors, including Lego, which last year narrowly beat Mattel to become the biggest toy company in the world. (Video via Warner Bros. Pictures / "The Lego Movie")

So Mattel has looked to revitalize, pushing new initiatives like Barbie's Sheroes, a series of one-of-a-kind dolls it created to honor female role models like "Selma" director Ava DuVernay and actor Kristin Chenoweth.

That follows a trend of more empowered Barbie characters, including a superhero Barbie, featured in the doll's latest movie, "Princess Power." (Video via Mattel Inc. / "Barbie in Princess Power")

Mattel's stocks were up earlier this month after posting better-than-expected first-quarter earnings.