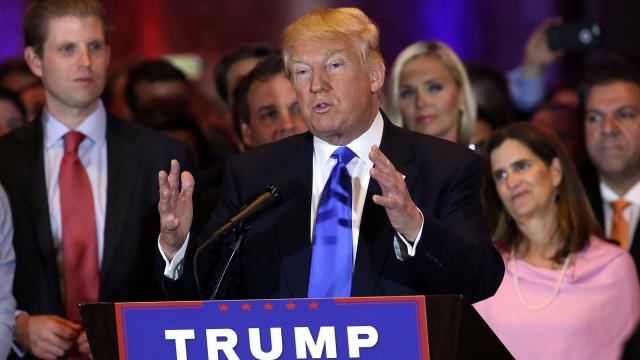 During his victory speech Tuesday, Trump hinted that Hillary Clinton is only winning because of her gender. And Mrs. Christie didn't seem too pleased.

Donald Trump made a comment about Hillary Clinton's gender in his victory speech Tuesday night.

And Mary Pat Christie, the wife of New Jersey Gov. Chris Christie, clearly wasn't having any of it.

"And frankly, if Hillary Clinton were a man, I don't think she'd get 5 percent of the vote. The only thing she's got going is the women's card. And the beautiful thing is women don't like her, OK?" Donald Trump said during his speech.

Yes, during the final moments of his Q&A with reporters in New York, Trump hinted the only reason Hillary Clinton is winning is because of her gender.

And the look on Mrs. Christie's face appeared to go from stoic to sour as she seemingly turned toward her husband and, as some observers claim, slightly rolled her eyes.

Now, many others have come to Mary Pat's defense, saying viewers were reading a bit too much into her expressions. And hey, it might just run in the family.

As you might recall, Gov. Christie famously sported a similarly surly face when he stood by Trump's side as the GOP front-runner spoke after winning several primaries in early March.