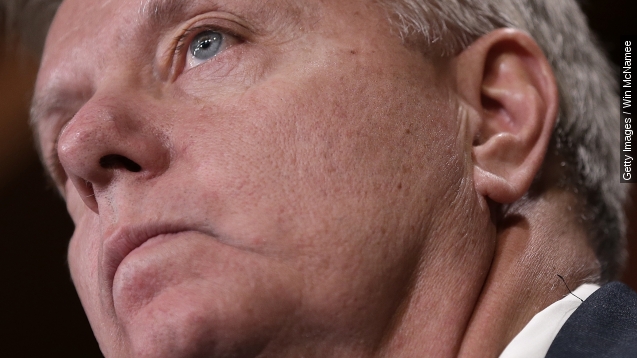 And with that, South Carolina Sen. Lindsey Graham is in the race for the GOP presidential nomination. Or is he? He'd told supporters that Monday morning's appearance on CBS would be a "very important" 2016 announcement.

" ... central South Carolina, where I will make an announcement on June 1," Graham said on CBS.

Except that despite using language like "I'm running because ... " Monday, he still maintains he won't make an official announcement until June 1.

Probably safe to assume that announcement will be that he's running.

When he is officially official, look for Lindsey Graham to distinguish himself from the rest of the field on the back of his foreign policy credentials.

"His primary job is to defend this country. And he's failed," he told ABC's "This Week."

He's been a frequent critic of the current administration's actions in Syria in particular. But he's not running against Obama.

"Generally speaking, he has been wrong more than he is right. He has an isolationist view of the world that I don't share."

But he is running against fellow Republican Rand Paul, which is who Graham was just talking about there.

Paul, by the way, wouldn't call himself an isolationist, but his — let's call it more noninterventionist — approach is frequently at odds with Graham's more hawkish one.

Graham is kind of a "boots on the ground" guy. He's called for 10,000 troops on the ground in Iraq and Syria to combat ISIS, an area in which he also differs from fellow candidate Sen. Ted Cruz.

"What we ought to have is a direct concerted air campaign to take them out," Cruz told ABC.

So there's no question that as the field fleshes out, Graham will be one of the most outspoken advocates for a more muscular American foreign policy. But on domestic issues like climate change and immigration — where he's maintained support for a path to citizenship — he may actually end up being one of the moderates among GOP candidates.