Media Battles On Whether Kim & Kanye Got Hitched 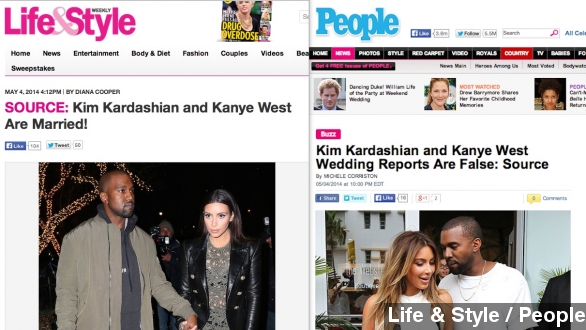 SMS
Media Battles On Whether Kim & Kanye Got Hitched

By Lauren Zima
May 5, 2014
Magazines are in a reporting war over whether Kim Kardashian and Kanye West actually got married over the weekend.
SHOW TRANSCRIPT

Did they? Did they not? It's been quite a weekend of rumors as to whether Kim and Kanye tied the knot.

"Did Kim Kardashian and Kanye West finally get married. Well, it depends on what you read and who you ask." (Via ABC)

Yes it does. So, Life & Style magazine reported Sunday evening that the couple is married — that they got a marriage license and were privately and quietly married in California.

It wouldn't be crazy — rumors over the past week were that they had obtained a confidential marriage license and would be marrying in private ahead of their more lavish celebration in Paris. (Via TMZ)

But late Sunday night, People magazine shot down Life & Style's story, saying its source said the pair had not officially tied the knot.

On the record, it would be impossible to know if they did get a confidential marriage license. Note the word "confidential." (Via California Department of Public Health)

Kim and Kanye are reportedly set to celebrate their wedding at this opulent estate in Paris on May 24th. It's a residence with modern amenities, but designed to look like a traditional, over-the-top French chateau. (Via Cogemad.com)

So far, no comment from either celebrity's rep. Kim Kardashian has also been unusually silent on social media for a few days. (Via Twitter)

And no comment from other major celebrity news outlets — UsWeekly is remaining quiet on the Kim and Kanye secret marriage front...

And even the Kardashians' home network, E!...