Did ESPN Cave To Pressure In Suspending Stephen A. Smith? 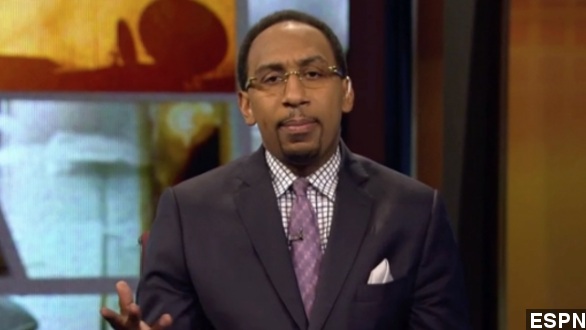 SMS
Did ESPN Cave To Pressure In Suspending Stephen A. Smith?

By Christian Bryant
July 29, 2014
ESPN decided to suspend Stephen A. Smith for his comments on domestic abuse, but only after the media questioned whether the host would be punished.
SHOW TRANSCRIPT

Despite numerous apologies online and on-air, the fallout from ESPN personality Stephen A. Smith's comments on domestic violence aren't over just yet. (Via Getty Images)

ESPN announced Tuesday Smith, who is the co-host of "First Take," will be off-air for a week — a suspension stemming from his comments on how women should take preventative measures to avoid "provocation" in domestic abuse situations.

Smith's comments were made during a discussion about Baltimore Ravens running back Ray Rice and his two-game suspension after being charged with physically assaulting his wife. (Via Getty Images)

While the NFL's so-called "lenient" punishment for Rice sparked a frenzy, the focus quickly shifted to ESPN. Before the network punished Smith, many outlets asked if he would face any repercussions at all.

It's unclear if ESPN suspended Smith because of outside pressure, but clearly the network's handling of the matter was on everyone's mind. (Via The New York Times | Mediaite | Awful Announcing)

That can be explained, in part, by what some say are inconsistencies in what'll get ESPN talent suspended or even fired.

A USA Today article from 2013 points out some recent examples, like Tony Kornheiser negatively commenting on a female colleague's outfit (two-week suspension), Smith using the n-word twice (no suspension) and Max Bretos saying "chink in the armor" to describe the weaknesses of Asian-American NBA player Jeremy Lin (30-day suspension). A writer who used that same phrase online was fired.

A Daily Beast writer says culture might have something to do with the behavior of male talent, describing the network as "a boy’s club where reports of egregious incidents/remarks by its commentators vis-à-vis the treatment of women have plagued the network for years.'"

But a writer at Awful Announcing believes this most recent situation has little to do with the male-dominated staff: "The Worldwide Leader has a long history of suspending, firing, or otherwise parting ways with employees who are perceived to hurt their reputation."

ESPN said Monday the network will continue having "constructive dialogue" on the topic that set this whole thing into motion. Smith is expected to return to ESPN next Wednesday.