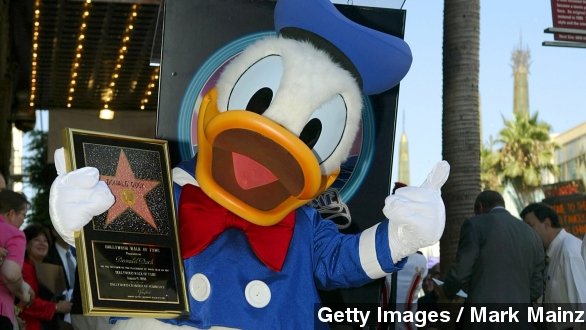 We think of Donald Duck as Mickey Mouse's lovable, but sometimes cranky, counterpart.

What we don't think of him as is someone who helps police give people tickets. Yet, that's what happened in Fort Lee, New Jersey.

An undercover cop dressed as Donald kept trying to cross a crosswalk, but a lot of drivers didn't stop for him.

The local police chief said this year, 40 people were struck in crosswalks. WABC reports 130 drivers each got a $230 ticket and two points deducted from their licenses for not stopping for the duck.

Now, it was Halloween. So the costume wasn't that crazy. But, some pedestrians said they were startled.

Still, according to New Jersey law... "The driver of a vehicle must stop and stay stopped for a pedestrian crossing the roadway within any marked crosswalk."

This crosswalk was definitely marked.

And this doesn't count as entrapment, either. New Jersey law says officers are allowed to use tactics like this. They can:

" ... use stealth and strategy, decoys, traps and deception as a tactic to outwit and catch those engaged in criminal enterprise. But the law does not authorize a law enforcement officer ... to trap another person by inducing or encouraging him/her to commit an offense."

So police can use deception, like a Donald Duck costume, they just can't encourage people to break the law. And New Jersey isn't alone in the whole "dress-up-a-cop-as-a-character-and-give-people-tickets" thing.

In December, a Las Vegas police officer dressed as an elf and walked in a marked crosswalk as well.

KTNV: "Anyone who didn't stop was slapped with a $300 fine. He wore the costume so no one could use the old excuse, 'I didn't see you.'"

And in Canada in 2012, officers dressed up as homeless people, holding cardboard signs warning drivers if they were on their phones, they'd get tickets, reports the National Post.

So, the lesson here is ... follow the rules of the road, come oversized Donalds, weird-looking elves, etc.