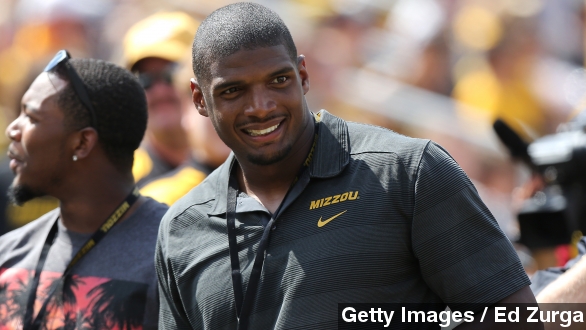 The Dallas Cowboys signed the defensive end to their 10-man practice squad Wednesday, meaning he'll have a chance to compete for a spot on the team's 53-man regular season roster.

This week the former SEC co-defensive player of the year was cut by the St. Louis Rams, the team that drafted him in the seventh round. Although Sam played well in preseason games for the Rams, some outlets say the team already had a lot of depth at the defensive end position.

But we all know Michael Sam's personal life has been covered just as much, if not more, than his performance on the football field. (Via Sports Illustrated, CNN, Bleacher Report)

And now he's going to a team known for making headlines and gaining the media's attention.

JERRY ANGELO, FORMER GENERAL MANAGER OF THE CHICAGO BEARS: "Football move. Their defense is atrocious. Anybody with a pulse that can rush the passer, they've got to take a look."

Sam was already the subject of heightened media attention Wednesday, as ESPN radio host Matt Mosley tweeted, "Just another practice squad addition for the Cowboys" with a photo of media surrounding Sam.

A writer for USA Today believes Michael Sam will have a much better chance of making the team in Dallas due to teammates' injuries and a lack of depth on the team's defensive line. He writes, "The Cowboys are seeking help defensively after allowing the most yards in franchise history last season."

Head coach Jason Garrett echoed that in a press conference after the signing.

GARRETT VIA ESPN: "Michael Sam, we feel like he has a chance to come in at a position we've tried to address really throughout the offseason, throughout training camp, and compete for a spot."