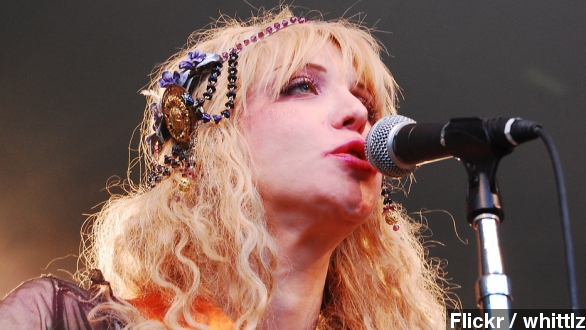 You may remember a supposed mock wedding vow found in Kurt Cobain's wallet when he died? Well turns out, the note might not have been written by the late musician.

The note quickly made its rounds in the mainstream media after the Seattle Police Department made it public last week — many even outright saying Cobain wrote it. Then some began to question what role his marriage to singer Courtney Love played in his suicide in 1994. (Via Mashable, Billboard, Los Angeles Times, MTV, E!, San Jose Mercury News)

And with a phrase like "[she's] a [expletive] with zits and siphoning all [your] money for doping and whoring,"  written in the note, many believed the marriage played a big part. (Via Fox News)

But a writer for The Seattle Times claims Love confessed to him Friday — saying she actually penned the note as part of frequent sarcastic exchanges between the couple.

In fact, the writer claims Love actually wrote the note in 1991 on New Years Eve — the night Cobain's band Nirvana appeared in San Francisco. The note was in fact written on stationery from a hotel in that city. (Via Geffen Records / Nirvana)

Whether Love really did confirm the note's origins to this writer is still a matter of discrepancy, however. The author, Charles R. Cross, who has written several books on Cobain, might even be called a bit of a conspiracy theorist.

He's among others who speculate Cobain did not commit suicide, but was murdered — despite a suicide note with Cobain's handwriting found at the scene where he died. (Via CBS)

The wedding-vow note was one of several items from the scene recently made public, including some previously undeveloped film that sparked a number of incorrect reports claiming the case of Cobain's death had been re-opened. (Via KIRO)

But a Seattle PD detective told The Washington Post the case was in fact not open — it was just being reviewed in anticipation of its anniversary last month.

Whatever the origins of the note really are, it's undeniable the facts surrounding Cobain's death remain a popular contentious topic even 20 years later.