Did Apple Just Tell Us When Interest Rates Will Go Back Up? 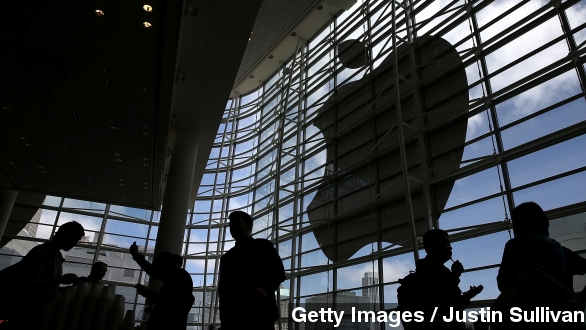 SMS
Did Apple Just Tell Us When Interest Rates Will Go Back Up?
By Cliff Judy
By Cliff Judy
February 3, 2015
Apple's large bond sale locks it into current interest rates for borrowing, leading some to wonder if the tech giant knows something we don't.
SHOW TRANSCRIPT

For months — even years now — the world has looked to the U.S. Federal Reserve to see when spending would tail off and interest rates would increase. There’s a lot of money to be won or lost based on the timing of your prediction, after all.

But is it possible this whole time we were looking at the whole situation backward?

That was the speculation late Monday into Tuesday as Apple — coming of an iPhone 6-charged quarter in which it posted record profits — announced it would issue $6.5 billion in bond sales. (Video via Apple)

Apple effectively locked in very low interest rates to borrow money. Why they would do that now specifically is what has everyone thinking maybe the company knows something the rest of us don’t.

The U.S.’s 10-year Treasury note rose five points in a few hours overnight to 1.71 percent, but that’s still incredibly low and more than a full percent lower than its highest point in the last year.

Not everyone’s convinced Apple’s moving faster than the rest of us on predicting borrowing rates to go up.

A corporate credit analyst told Bloomberg, “The company is building on the momentum of a strong past couple of weeks. They are being advantageous with the current environment.”

But the outlet also cited the head of overseas investment at a South Korean pension service. “This is the right time to issue corporate bonds. Interest rates will go up in the middle of this year."

So who’s right? To be fair, this is the fourth time in the last two years Apple sold off a large chunk of debt, and interest rates never skyrocketed in the months following those sales.

But it comes as nearly everyone is recommending you take advantage of low interest rates if you can.

The National Bureau of Economic Research estimates for a $200,000 mortgage, even half a percentage difference in your interest rate costs $20,000 over the life of a loan. So locking in a rate of 6.5 instead of 4.5 would be like paying for an extra 40 percent of house in interest.

So if that’s what you could save on a $200K house, imagine what Apple can save with more than 30,000 times that much money. (Video via Apple)