Did Amy Schumer Steal Our Hearts With Stolen Jokes? 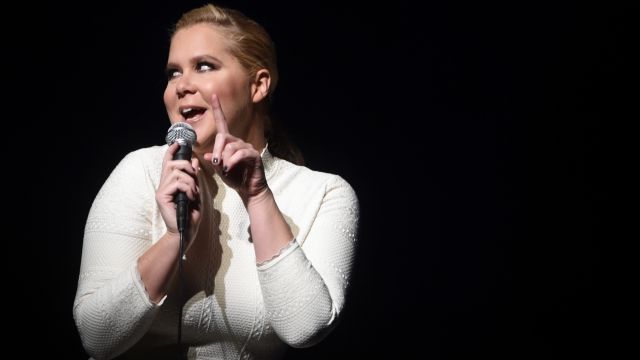 SMS
Did Amy Schumer Steal Our Hearts With Stolen Jokes?
By Cody LaGrow
By Cody LaGrow
January 21, 2016
A video accuses comedian Amy Schumer of lifting jokes from other comedians' stand-up acts, but she denies the claims.
SHOW TRANSCRIPT

Actress and comedian Amy Schumer has stolen our hearts, and now she's accused of stealing jokes.

A video is making the rounds showing Schumer's recent jokes back-to-back with other comedians' stand-up, like this decades-old bit from Wendy Liebman.

"I am a good person, I swear to you. Like, I'm very old-school. I think the guy should pay on the first date ... for sex," Schumer said in her 2015 stand-up performance.

This joke from Kathleen Madigan is also being used as ammo.

"But Oprah, you're a billionaire; you have enough money to pay a man to stand there and literally slap s*** out of your hand before you put it in your mouth," Madigan said jokingly.

Schumer had a similar parody on her show "Inside Amy Schumer" that showed a diet plan where the ham sandwich is hit right out of your hand.

Schumer was also accused of riddle robbing Tammy Pescatelli and Patrice O'Neal but later tweeted she "would never steal a joke" and also denied the allegations on Jim Norton's SiriusXM Radio Show.

"I'm literally gonna take a polygraph test and put it on my show this season, and I promise, whatever the results are, I won't let them cut," Schumer said.

The "Trainwreck" star's fourth season of "Inside Amy Schumer" is expected to be released later this year, and today, we're guessing she's taking Chrissy Teigen's advice.