Did A Duracell Ad Reveal A Huge 'Star Wars' Spoiler? 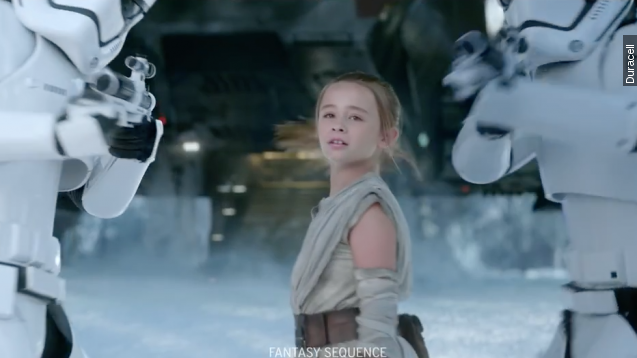 SMS
Did A Duracell Ad Reveal A Huge 'Star Wars' Spoiler?
By Ben Lawson
By Ben Lawson
November 4, 2015
This Duracell battery commercial might have just given away a major plot detail for "Star Wars: The Force Awakens."
SHOW TRANSCRIPT

We might have just gotten some major "Star Wars: The Force Awakens" spoilers from a battery commercial, of all places.

Yup, the supposed spoiler comes from a Duracell Christmas ad that shows a brother and sister pretending to be Jedi with Duracell-powered lightsabers.

First off, you get a live action look at C-3PO and his new red arm — something the official trailers and movie posters have been avoiding.

But the big potential spoiler comes later, when you see the girl in the ad wearing what appears to be the same outfit that Daisy Ridley's character, Rey, wears in the film.

We really don't know much about the character, but there is some speculation she could be another Jedi. Well, what comes next in the battery commercial could give that away.

"What took you so long?" the girl said.

The girl dressed as Rey definitely just used some force powers and is wielding a lightsaber.

If Rey is a Jedi, that means there are at least two in the film, her and John Boyega's character, which is a pretty big deal considering they were so few and far between in the original trilogy.

So maybe Rey is a Jedi after all, or perhaps it's just a battery commercial. We likely won't know for certain until the movie hits theaters Dec. 18.