Did A Child Slave Make The Chocolate Bar You're Eating? 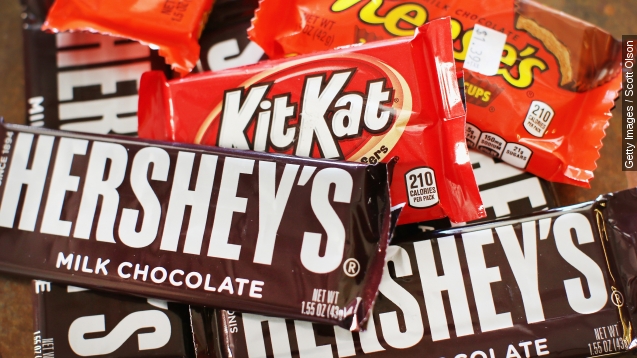 Class action lawsuits were filed against Hershey's, Nestle and Mars. The suits claim each knowingly had cocoa sources linked to child slaves.

Class action lawsuits were filed Monday in California against Hershey's, Nestle and Mars, claiming the companies knowingly use cocoa harvested in west Africa by child slaves.

The American chocolate industry has long been accused of such offenses, but this lawsuit adds a new spin. (Video via CNN)

Besides seeking monetary damages for those who live in California and bought the companies' chocolate, the plaintiffs want the packaging of the candy to say child slaves were involved.

The lawsuits cite an ongoing Tulane University study, financed by the U.S. Department of Labor, which estimates more than 4,000 children are forced to produce cocoa on Ivory Coast plantations.

The complaint reads: "To make matters worse, sometimes extremely poor people sell their own children into slavery for as little as $30. Children that are sometimes not even 10 years old carry huge sacks that are so big that they cause them serious physical harm."

A Nestle spokesperson denied the allegations and told The Daily Beast "child labor has no place in our cocoa supply chain." (Video via Nestle)

A Hershey spokesman cited sustainable farmer training programs the company has previously established and said the cocoa industry "will invest another $400 million in the region by 2020 to reduce instances of inappropriate labor issues." (Video via The Hershey Company)

And a Mars representative similarly denied the allegations in an official statement to The Daily Beast.

The west African region in question is home to two-thirds of the world's cocoa beans. Meanwhile, the chocolate industry is worth $90 billion.