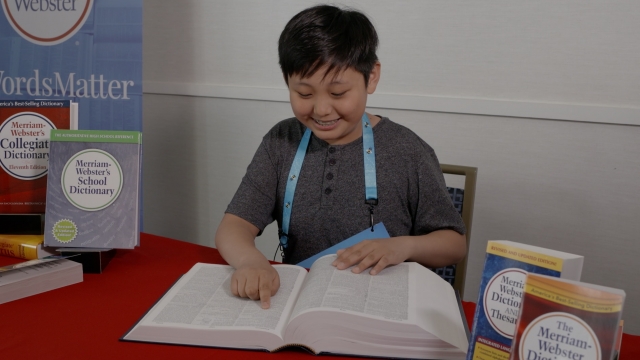 Dictionary data suggests that people are searching for deeper meaning than a standard definition.

We asked students at the Scripps National Spelling Bee what they've looked up in the dictionary lately:

"Acetylsalicylic acid is my favorite word, and it's just really cool to know what the origins of it are."

"Actually, it was from yesterday. Lexicographer, lexicographical, so that's just the art of defining words."

These kids are usually looking for the spelling or the roots of tough words. Not surprising, since they're competitive spellers. But it turns out the rest of us are looking up much simpler words, like "family" and "democracy" — so why is that?

Ever since Merriam-Webster made its dictionary available online in 1996, the company's been keeping track of which words people look up most. Then it tries to understand why.

Beyond spelling, origin and pronunciation, Merriam-Webster is pretty sure people are looking for the context behind words.

Peter Sokolowski, the editor-at-large of Merriam-Webster, says one of the first examples of this was when Princess Diana died in 1997. One of the most looked-up words was a surprisingly simple one: "princess."

"People wanted to know, what is it about being a princess that was specific to her? Was she born being a princess? Would she automatically be the queen? Is a princess higher than a duchess? There are a lot of questions that can be answered from a dictionary definition. And that also was the first clue that we had … that many people go to the dictionary for pretty general terms, words like culture and science and princess."

The dictionary can also tell the story of how people process large-scale tragedies. Sokolowski points to the evolution of the most looked-up words during the week of Sept. 11, 2001.

"It is sort of moving to think of initial concrete words of destruction like rubble and triage, so people were following the news. … And then we saw these words of reaction and emotion, like succumb and surreal, and finally we found maybe day five and day six words like terrorism or jingoism, so analytical, political terms that showed that people were trying to grapple with the event and understand it and maybe explain it."

As much as words can tell us about people's curiosity or their emotional processes, there are some things the dictionary can't do.

"So in February, the word love is absolutely the No. 1 word … and that's a big, important thing in a dictionary that's heavily consulted. … I don't think they're interested in spelling, however. … We have to assume that people are looking for something else, philosophy, they want to know about the phenomenon of love. … That really is more for a philosopher or for a poet, maybe."

So what do people want to know about today? Some of the trending words from the past week include "fascism," "culture," "mandamus" … and "pergameneous," which means "resembling parchment." It sounds suspiciously like a spelling bee word.

"I wonder if the spelling bee has anything to do with the words that are being looked up right now? I wonder if people are watching this at home saying, 'Hmm, what does that word mean?' and then looking it up in the dictionary."

Ghazala Irshad is a news editor who loves chopping and choosing just the right words to shape strong stories. Before joining Newsy in Chicago, she spent several years abroad reporting on revolutions and refugees in the Middle East and Southeast Asia. Her favorite experience was investigating police involvement in the looting of antiquities from the pyramids in Egypt. She hopes to continue unearthing interesting stories and holding those in power accountable, specifically on environmental and public health issues. She holds a master's in journalism from the American University in Cairo and a bachelor's in journalism from the University of Missouri-Columbia. Fun fact: Ghazala was a member of the Scripps family long before Newsy — as a National Spelling Bee contestant in 1998. @ghazalairshad