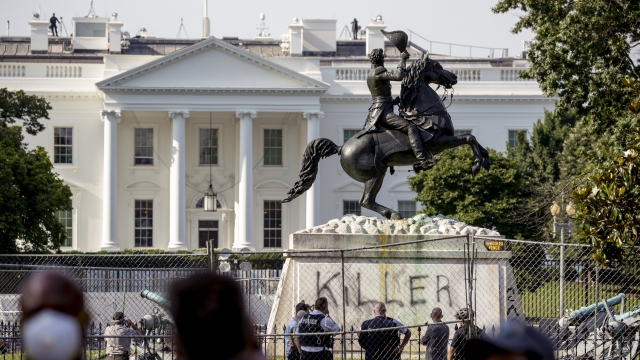 The Department of Homeland Security said it's sending deployment teams to federal monuments over the Fourth of July weekend to protect those monuments from protesters.

Protesters have been toppling Confederate statues and monuments amid nationwide protests over the death of George Floyd in Minneapolis police custody. President Donald Trump has called out protesters who have torn down monuments on Twitter.

Homeland Security said in a statement Wednesday: "DHS is answering the President's call to use our law enforcement personnel across the country to protect our historic landmarks. We won’t stand idly by while violent anarchists and rioters seek not only to vandalize and destroy the symbols of our nation, but to disrupt law and order and sow chaos in our communities."

President Trump signed an executive order last week to protect the country's monuments. According to the order, anyone who "destroys, damages, vandalizes, or desecrates a monument, memorial, or statue" in the U.S. could face up to 10 years in prison.

Several cities, like Virginia's capital, have removed Confederate statues. Protesters in Richmond have taken down at least four monuments, including ones honoring Confederate President Jefferson Davis and Confederate Gen. Williams Carter Wickham. The state is trying to remove a massive statue of Confederate Gen. Robert E. Lee, but a set of lawsuits has put its removal on hold.