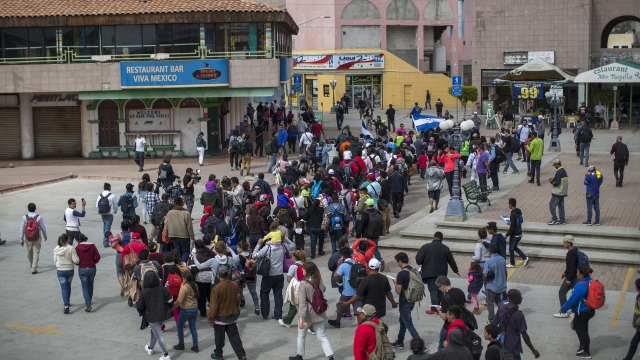 SMS
DHS Says It's Sent 6,000 Asylum-Seekers To Mexico
By Katherine Biek
By Katherine Biek
May 22, 2019
An appeals court recently said the policy of sending some asylum-seekers to Mexico to await their immigration hearings could continue.
SHOW TRANSCRIPT

Roughly 6,000 people seeking asylum in the U.S. have been sent back to Mexico to wait out their immigration hearings, according to figures provided to CNN by the Department of Homeland Security.

The U.S. began sending back asylum-seekers at San Diego's San Ysidro crossing in January. The policy doesn't apply to those seeking asylum from Mexico or children traveling alone. The Trump administration has since expanded it to other crossings along the southern border.

It's unclear how long these migrants are going to have to wait before they can see an immigration judge. When the policy was rolled out, officials said they'd only have to wait in Mexico for 45 days.

But one asylum-seeker told BuzzFeed News that he's now been ordered to wait until next February to make his court appearance. DHS has not specifically addressed the longer wait times, but the U.S. asylum system is reportedly working through a backlog of some 850,000 cases.

Human rights groups challenged the immigration policy in court, saying it violates humanitarian protections and puts migrants in danger. The most recent court ruling in the case allowed the Trump administration to continue enforcing the policy, for now.