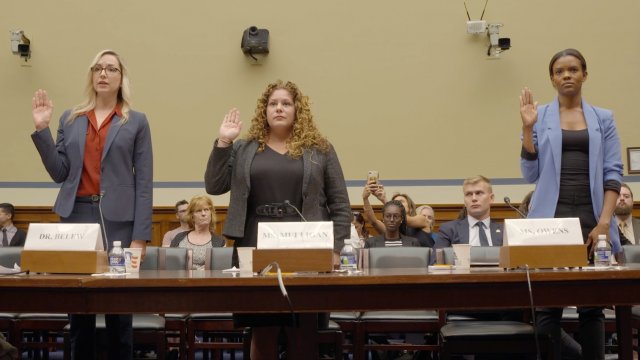 SMS
DHS Releases Plan To Combat Targeted Extremism
By Alexandra Miller
By Alexandra Miller
September 20, 2019
The acting DHS secretary said "targeted violence within our borders that is more diverse than at any time since the 9/11 attacks."
SHOW TRANSCRIPT

White nationalism. It's a movement experts say is evolving, growing extremists online, where racists may inspire each other without ever even meeting.

The Anti-Defamation League says extremist-related killings increased 35% from 2017-2018. The difference in that year compared to others is that all were carried out by right-wing extremists. The majority of those over the past decade were committed by white supremacists.

The Department of Homeland Security released a new plan to combat terrorism and targeted violence. In a statement, the acting secretary said while DHS is paying attention to foreign threats, it is also paying attention to enemies who "incite violence in our Nation's youth, disenfranchised, and disaffected, in order to attack their fellow citizens and fray at the seams of our diverse social fabric."

Mother Jones reported earlier this week alt-right groups on the popular chat service Telegram are creating a list of Jewish people who are critical of white nationalism. Sen. Richard Blumenthal is among the public figures, including activists and journalists, reportedly on the list.

But some critics who dismiss these concerns, like Candace Owens, say the issue is overblown, intentionally distorted by Democrats. She also testified Friday.

"White supremacy is real just as racism is real, but neither of these ideologies are real in this room. They have become a mechanism for the left to call these hearings and to distract from much bigger issues facing minorities," she said.

The acting DHS head called white supremacist extremism one of the most "potent ideologies" driving acts of violence in the U.S.