DHS May Want To Name Fentanyl A 'Weapon Of Mass Destruction' 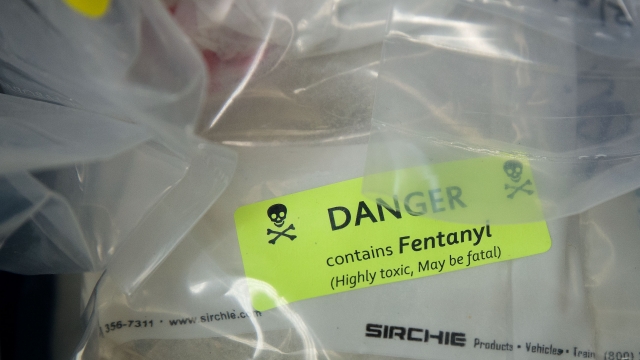 The Department of Homeland Security may be considering classifying fentanyl as a weapon of mass destruction, or WMD. News outlet Task & Purpose reportedly obtained an internal memo from the agency's WMD office that outlines how the government could designate the drug as a potential "mass casualty weapon." According to the February proposal, fentanyl's "high toxicity and increasing availability" could make it an appealing option for a chemical weapons attack. The federal government currently defines a WMD as any type of material, weapon or device that's intended to harm a large number of people. Fentanyl's a synthetic opioid that's legally used for pain management in a medical setting and also illegally made into a street drug. Most of the substance is produced in China before it's sent to the U.S. It's true that both versions of fentanyl are highly potent and have contributed to an increasing number of overdose deaths nationwide. But is it realistic to consider the drug could fit into that WMD definition? One expert who spoke to Task & Purpose says there are "literally dozens" of other chemicals out there that could be "easily weaponized" for a large-scale attack. That source also suggested the proposal could just be a move to get more money for DHS' shrinking WMD budget. The department hasn't made any formal announcements about the potential classification, but the memo listed next steps as hosting an interagency planning event to discuss the option. According to the CDC, there were more than 18,300 fentanyl-related deaths in the U.S. in 2016.