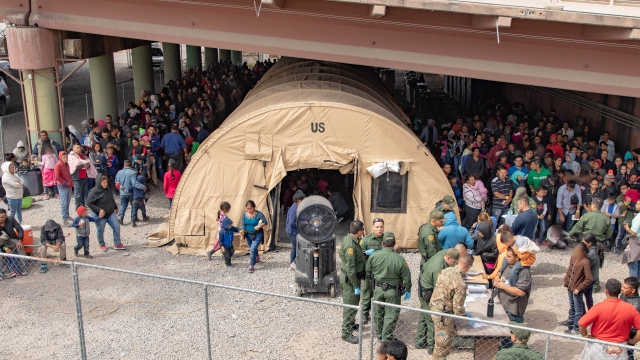 SMS
DHS Inspector General Investigating Detainee Complaints In Texas
By Katherine Biek
By Katherine Biek
April 24, 2019
The complaints were made by detainees at the same processing center where some migrants were being force-fed earlier this year.
SHOW TRANSCRIPT

A federal watchdog confirmed to the Associated Press that it's investigating complaints from multiple detainees at an immigration facility in Texas.

U.S. Immigration and Customs Enforcement told Newsy in February that officials were force-feeding some detainees at the El Paso Processing Center who'd gone on a hunger strike.

ICE has pretty well-documented hunger strike protocols. After a detainee goes 72 hours without eating, they're medically evaluated and monitored. They're also offered counseling regarding medical risks associated with hunger strikes. If the detainee refuses medical treatment, but their doctor decides their life is at risk, ICE policy states it should seek a court order allowing for involuntary treatment.

The agency said it followed those protocols and got a federal judge to sign off on force-feeding nine detainees at the center.

ICE officials stopped force-feeding all of the detainees soon after a judge said on Feb. 13 that the agency had to stop feeding two immigrants through nasal tubes against their will. At the time, the judge said he would consider reversing the order if their health started to decline.

Dozens of Democratic lawmakers have called for the Department of Homeland Security Office of the Inspector General to look into ICE's force-feeding policies and conditions at facilities used to house migrants.

A spokeswoman for the inspector general's office would not confirm to the AP any details about the complaints it's looking into. ICE also declined to comment on news of the investigation.