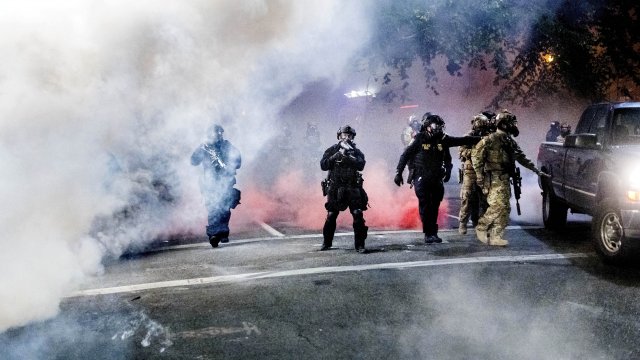 SMS
DHS Expands What Info Agents Can Gather On Protesters
By Caitlin Baldwin
By Caitlin Baldwin
July 21, 2020
The Department of Homeland Security is now allowing its personnel to collect more information on protesters.
SHOW TRANSCRIPT

The Department of Homeland Security is expanding what information its agents can gather on protesters.

The Washington Post obtained new guidance from the Office of Intelligence and Analysis that allows DHS personnel to collect more information on anyone who threatens to destroy public monuments, memorials or statues.

DHS has always had the authority to protect monuments from terrorist threats, but never from protesters.

DHS was named in a lawsuit over how unidentified federal agents have dealt with protesters in Portland, Oregon. The state's attorney general has said: "The current escalation of fear and violence in downtown Portland is being driven by federal law enforcement tactics that are entirely unnecessary and out of character with the Oregon way. These tactics must stop."

The new guidance allows DHS to monitor social media accounts and other public sources of information about protesters, but nothing in it says agents should arrest them.