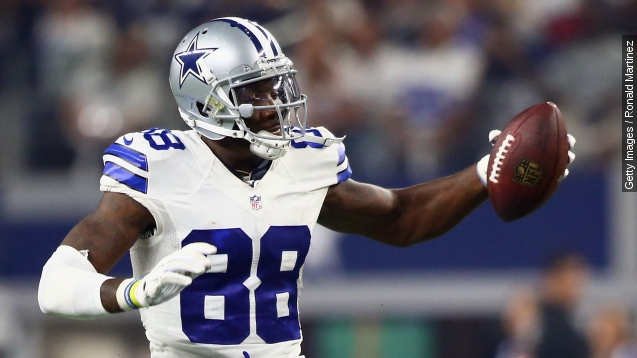 SMS
Dez Bryant's Broken Foot Comes At A Bad Time For The Cowboys
By Matt Moreno
By Matt Moreno
September 14, 2015
Star wide receiver Dez Bryant will be sidelined for four to six weeks after suffering a broken foot during the Cowboys' win over the Giants on Sunday.
SHOW TRANSCRIPT

The Dallas Cowboys captured a huge win Sunday night, but will now be enduring the effects of a big loss.

Star wide receiver Dez Bryant will be sidelined for four to six weeks after suffering a broken foot in the Cowboys' win over the New York Giants. It's unclear when he suffered the injury, but Bryant left the game in the fourth quarter and will have surgery on the foot Tuesday. (Video via WFAA)

After the game, the All-Pro receiver kept the attention on his teammates. He limped out of the locker room to greet his teammates after the team's thrilling late-game victory. He was in obvious pain walking back in. (Video via ESPN)

Bryant also made sure to give quarterback Tony Romo plenty of love, tweeting, "I'll be back soon but how about 9????????#cowboynation."

And all of Cowboys nation is hoping the team can hold strong through Bryant's absence.

In the next six weeks, the Cowboys play division rivals the Philadelphia Eagles and again against the Giants. They'll also match up against defending Super Bowl champions the New England Patriots and defending NFC champions the Seattle Seahawks. Not an easy task by any stretch of the imagination.

Dallas is also dealing with a key loss in the offseason with running back DeMarco Murray heading to Philadelphia via free agency. The Cowboys are going with the running back-by-committee approach with Joseph Randle carrying the ball 16 times versus Darren McFadden's six touches Sunday night.

As ESPN reports, the loss of Bryant will likely affect how teams approach Dallas now. "The Cowboys' offense will change without Bryant because he's a player who draws constant double-teams, making it easier for the Cowboys to run the ball. Without him, teams will probably play the run more aggressively and dare the Cowboys to make big plays in the passing game."