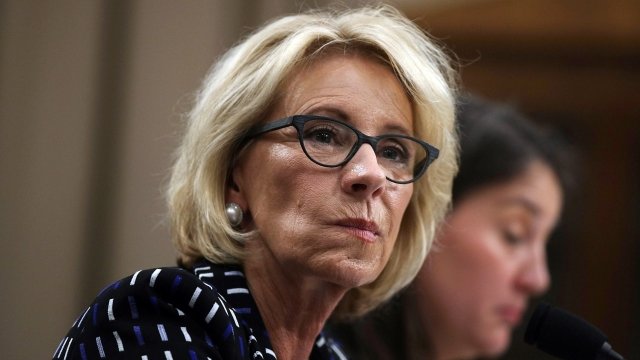 Known as borrower defense rules, the Obama-era regulations are meant to protect students who are cheated by so-called predatory colleges. They were set to take effect in July 2017 following an influx of fraud claims against schools like Corinthian Colleges and ITT Tech.

But under the Trump administration, the Education Department postponed the effective date to July 2019, and proposed new rules in the meantime. DeVos' guidelines would make it harder for college students who've been defrauded to get their federal loans erased.

A federal judge sided with attorneys general from 19 states and the District of Columbia, writing that DeVos' moves to postpone the student loan protection regulations were "unlawful" and "procedurally invalid."

Sen. Elizabeth Warren tweeted about the ruling, calling it a "huge win" for students who've been scammed by schools.

A hearing is scheduled Friday to determine the next steps in the case. The judge could order the Education Department to consider some of those student loan forgiveness claims.