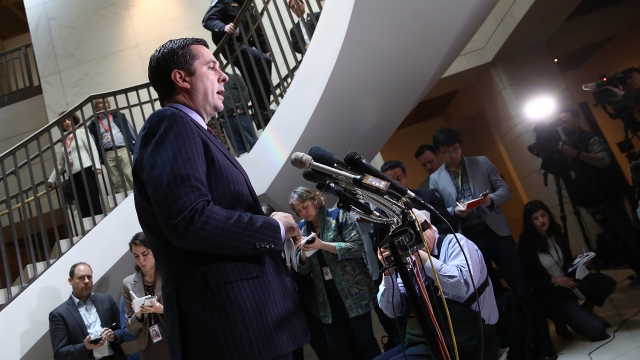 SMS
House Intel Chairman Devin Nunes Is Stepping Aside From Russia Probe
By Briana Koeneman
By Briana Koeneman
April 6, 2017
Nunes says he's stepping aside from the investigation into Russia's interference in the 2016 election. At least for now.
SHOW TRANSCRIPT

House Intelligence Committee Chairman Devin Nunes says he's stepping aside from the investigation into Russia's interference in the 2016 election. At least for now.

Nunes came under fire for discussing intelligence with President Trump before his fellow committee members. He said complaints filed against him with the Office of Congressional Ethics are the reason behind his decision.

He said in a statement Thursday, "The charges are entirely false and politically motivated, and are being leveled just as the American people are beginning to learn the truth about the improper unmasking of the identities of U.S. citizens and other abuses of power."

Rep. Mike Conaway will temporarily take charge of the investigation with assistance from Reps. Trey Gowdy and Tom Rooney.

In a statement, House Speaker Paul Ryan supported Nunes' decision to step aside, saying: "I know he is eager to demonstrate to the Ethics Committee that he has followed all proper guidelines and laws. In the meantime, it is clear that this process would be a distraction for the House Intelligence Committee's investigation into Russian interference in our election."

Nunes will still serve as the committee's chairman and will continue to carry out his other duties in the position.