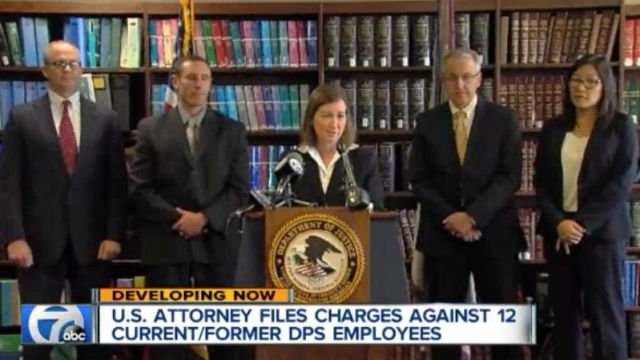 Each of the defendants named on Tuesday could face five years in prison and fines of up to $250,000.

The Detroit Public School system is in trouble. The district is broke, school conditions are terrible, teachers are leaving and now principals are being accused of conspiracy.

On Tuesday, federal officials announced bribery charges against a dozen former and current principals and an assistant superintendent for their illegal involvement with a school supplies vendor.

The criminal charges allege principals from Detroit Public Schools were awarded a total of over $900,000 in kickbacks and bribes in exchange for business with Allstate Sales.

Norman Shy, the owner of Allstate Sales, is also charged and at the center of this case. Shy allegedly rewarded principals with gift cards, cash and checks when they used his company as a vendor for supplies — supplies that were often never delivered.

One of the principals named in the conspiracy is Ronald Alexander. His name might sound familiar because last month TV show host Ellen DeGeneres donated $500,000 dollars to his school, Spain Elementary-Middle School, to help it afford new technology and building repairs.

"Of all the people in the whole world, I'm the happiest principal on Earth," Alexander told DeGeneres.

"If there is a message today that it may seem easy to take a bribe, but I'll tell you what, it's also easy to get caught. We will catch you and hold you accountable," U.S. Attorney Barbara McQuade said.

In total, officials say Allstate Sales cheated Detroit Public Schools out of $2.7 million. Each of the defendants named Tuesday could face five years in prison and fines of up to $250,000.