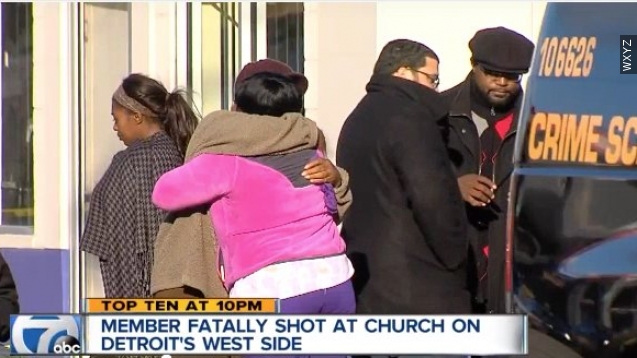 SMS
Detroit Pastor Fatally Shoots Man During Church Service
By Ryan Biek
By Ryan Biek
October 19, 2015
Police said a Detroit pastor shot and killed a man who allegedly stormed into a service and made threats while holding a brick.
SHOW TRANSCRIPT

A Detroit church service turned violent Sunday when police say a pastor shot a man who reportedly threatened him with a brick. The man was taken to a local hospital, where he later died.

According to local media, a 25-year-old man armed with a brick stormed into the City of God Church around 1:45 p.m., and the 36-year-old pastor pulled out a gun and shot the man multiple times.

WDIV reports the unnamed pastor was close with the alleged attacker and had tried to help him in the past. Detroit police noted the pastor had an unspecified incident with the victim before Sunday and had previously filed a police report.

WDIV said police wouldn't release the victim's name. But family members reportedly identified him to WXYZ as Deante Smith. They claim Smith believed the pastor was having an affair with his wife and allegedly had gotten her pregnant.

"He was at his wit's end with this whole situation. It didn't have to end like this for him. He was a great boy," Smith's cousin told WXYZ.

WXYZ also notes some reports claim the victim had been stalking the pastor and that he had threatened to kill all inside the church Sunday.

The pastor was taken in for questioning shortly after the incident and has reportedly been arrested. Police are examining if he had a permit for his handgun, and prosecutors will decide if the shooting was justified.