Michael Pineda, Pine Tar And The Unwritten Rules Of Baseball 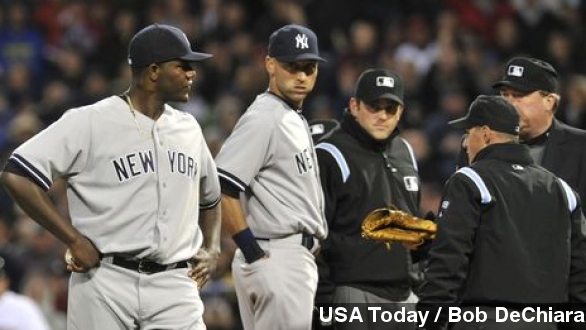 Yankees pitcher Michael Pineda is likely facing a suspension after a sticky substance thought to be pine tar was found on his neck Wednesday night.

Pineda was ejected from the game. It's the second time in as many starts for the pitcher that a peculiar "substance" appeared to be on a part of his body. (Via New York Daily News)

Although in the eyes of Major League Baseball pine tar is illegal for pitchers to use, should it really be outlawed? Pitchers reportedly use it in cold-weather games to get better control of the ball.

"I'd much rather have a guy on the mound throwing strikes and being accurate than having the ball slip out of his hands and head for my chin."

​"Yeah, most guys think it's a stupid rule, but it is a rule. No foreign substance." (Via CBS)

Rule 8.02 in the official MLB rulebook states pitchers shall not "​Have on his person, or in his possession, any foreign substance." Foreign substances used by pitchers are seen as unfair competitive advantages. (Via MLB)

But, headlines across the Internet seem to find Pineda guiltier of not being discreet about the whole thing than of using the actual substance. (Via Bleacher Report, Deadspin, Sporting News, USA Today, The Boston Globe)

Christopher Gasper from The Boston Globe writes: "Pineda's crime isn't really using pine tar. ... It's using it so blatantly that the Red Sox were forced to say something about it."

And a writer for Bleacher Report says: "Michael, Michael, Michael. If you're going to use pine tar, at least put it in the same place most pitchers do: On the inside of your belt  in the spot where you hitch up your pants when you need a little something extra."

A suspension for Pineda is expected to come down this week.