Despite Reports, Anonymous Did Not Declare War On Donald Trump 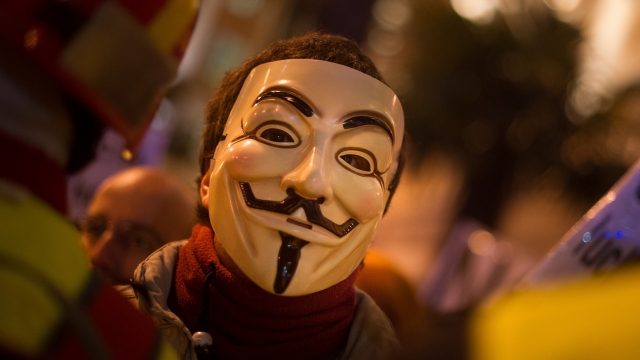 Several media outlets reported Tuesday that Anonymous declared war on Donald Trump, but that may not actually be the case.

Earlier this month, a video appeared on YouTube imploring hackers to help shut down Trump’s websites and sabotage his campaign by finding and exposing any secrets he doesn't want the public to know.

"Your inconsistent and hateful campaign has not only shocked the United States of America, you have shocked the entire planet with your appalling actions and ideas," the video says.

The call for action, named Operation Trump, asks hackers to help take down the website for Trump Tower in Chicago on April 1, but some major Anonymous Twitter accounts distanced themselves from the video.

The Twitter account @YourAnonNews called the video "cringeworthy" and said that there is no war against Trump. It also points out taking down a website for one of Trump’s businesses wouldn’t really do anything to disrupt his campaign.

One major issue with Anonymous is that it’s, well, anonymous. When all you need to claim you’re affiliated with the group is a Guy Fawkes mask and video editing software, it can be tough to tell where the messages are actually coming from.

The loosely-organized hacker collective has previously gone after groups like the Ku Klux Klan and ISIS, but said it’s not politically affiliated and won’t censor free speech.

This video includes clips from Anonymous and YouTube / anonymous246135 and images from Getty Images.