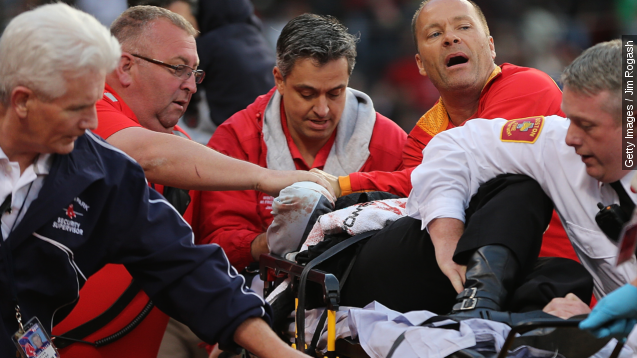 By Evan Thomas
June 6, 2015
Even with nets in place, wayward balls and, to a lesser extent, shattered bats can make foul territory a dangerous place.
SHOW TRANSCRIPT

A woman struck by a shattered bat at Friday night’s Red Sox-Athletics game remains in the hospital with life-threatening injuries.

The fragment hit her in the head during the second inning. The ball went fair, but part of the bat broke off and entered the stands. She was rushed off the field on a stretcher.

Oakland third baseman Brett Lawrie, whose bat shattered, told the Boston Globe said he was keeping the woman in his thoughts. He also lamented that much of the onus is on spectators to stay alert.

"You've got limited netting here in Boston. … You've really got to be heads-up for foul balls, anything coming into the stands, because it's so close there’s really no time to react," Lawrie said.

An average MLB batter can swing about two pounds of solid ash, birch or maple bat between 80 and 90 miles per hour. Anything coming off the bat, be it the baseball or fragments of a shattered bat itself, can move at speeds in excess of 110 miles per hour.

MLB changed its regulations in 2009 to cut down on catastrophic bat failure, and says since then broken bats are 50 percent less common.

But, of course, it still happens, and a recent Bloomberg investigation found there are some 1,750 injuries a season at major league games as a result of batted balls entering the stands. Bats flying into the crowd is much rarer.

But the league told Bloomberg last year it will leave the decision to expand — or not expand — protective netting during gametime to individual teams.