Despite Possible Triple Crown, Belmont Crowd Will Be Smaller 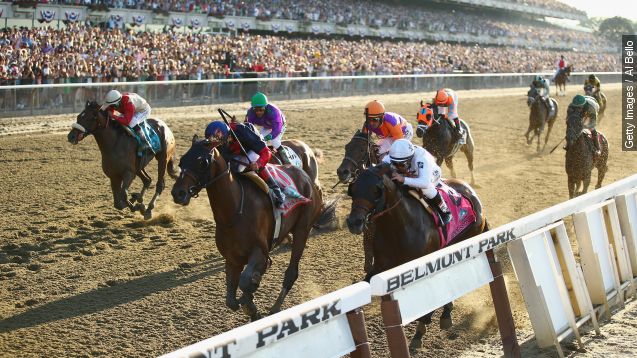 SMS
Despite Possible Triple Crown, Belmont Crowd Will Be Smaller
By Matt Moreno
By Matt Moreno
June 1, 2015
After a big crowd caused headaches for those leaving the Belmont Stakes last year, officials are capping this year's attendance at 90,000.
SHOW TRANSCRIPT

A record-breaking crowd came out last month to watch American Pharoah win the second big race of the Triple Crown at the Preakness Stakes, but things won't be the same at Belmont this weekend. (Video via Maryland Racing / Preakness Stakes)

New York racing officials are capping Saturday's crowd at 90,000 after the third-largest crowd of 102,000 people showed up at Belmont Park last year.

Last year, the massive crowd was a bit too much to handle.

Many complained of long lines in and out of the stadium, especially making the trek home a nightmare.

"Dangerous overcrowding left a sea of people waiting hours for LIRR trains that were painfully slow to show up. The racing association and the railroad have since spent $5 million on upgrades," Time Warner Cable News reports.

The confusion was so bad a formal complaint from the New York State Racing Fan Advisory Council criticized the New York Racing Association for disorganization, insufficient restrooms and a potentially dangerous exit strategy.

To put that Saturday's expected crowd into perspective, both the Preakness Stakes and Kentucky Derby saw record crowds this year. More than 131,000 packed Pimlico for the Preakness while 170,000-plus, nearly double Belmont's cap, watched American Pharoah win at Churchill Downs.

Lynn LaRocca, senior vice president and chief experience officer for NYRA, told The New York Times the possibility of a Triple Crown at the Belmont Stakes is "a phenomenal, once-in-a-lifetime event that could happen that everybody wants to be a part of, but the reality is that we want people to experience a great day of entertainment and want them to come back."

Saturday, American Pharoah will look to become the first horse to win the Triple Crown since 1978.

To help stagger the crowd, a concert by the Goo Goo Dolls will be available after the race. Attendance for that will likely be less than 90K.