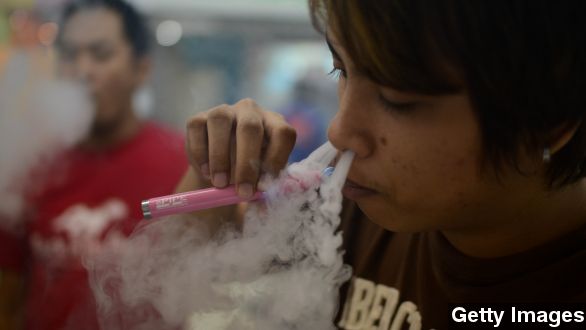 By Matt Moreno
July 31, 2014
Citing 81 previous studies, new research out of London suggests the benefits of smoking e-cigarettes instead of regular ones outweighs the risks.
SHOW TRANSCRIPT

​The e-cigarette has rapidly risen to popularity over the last few years as a way for cigarette smokers to kick the habit — despite studies that call into question the science behind e-cigs. (Via Science News, Getty Images)

But now, a new study says despite claims of unknown effects of e-cigs, they are at least better for you than the real thing.

The study was done by Queen Mary University of London and published in the journal Addiction. It says e-cigs cut tobacco-related deaths. The researchers came to this conclusion after looking over more than 80 previous studies. (Via HealthDay)

Science Daily quotes one of the researchers as saying: "​The evidence we currently have is clear: e-cigarettes should be allowed to compete against conventional cigarettes in the marketplace. ... Smokers who have not managed to stop with current treatments may ... benefit from switching to e-cigarettes."​

The first e-cigarette can be traced back to 2003 and has grown in popularity since.

Due to this rapid increase of usage, many critics have raised concerns over e-cigs' benefits and if or how they should be regulated. (Via Newsday, Medscape, Times of San Diego)

"One of the biggest concerns about e-cigarettes is that they will be attractive to minors who will then transition to real cigarettes." (Via CBS)

Most e-cigarettes are not regulated by the FDA, which means minors can still get their hands on them and the potential health risks of them are not fully known. (Via Getty Images)

Vox reports, for the most part, e-cigarette companies have been able to scoot by regulation and are largely excluded from local tobacco laws.

The World Health Organization wrote back in June that it was "currently reviewing the existing evidence around electronic nicotine delivery systems (ENDS)" and "working with national regulatory bodies to look at regularity options as well as toxicology experts to understand more about the impact ENDS may have on health."

CBS reports 2014 is expected to be the first year the e-cigarettes industry is worth more than a billion dollars. Bloomberg says it could reach as high as $1.5 billion.