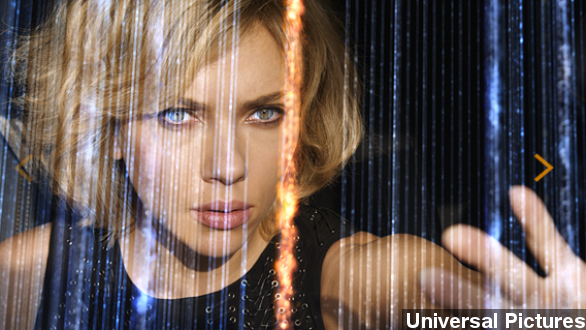 There's a brains versus brawn joke in here somewhere. Either way, Scarlett Johansson​'s "Lucy" beat up The Rock's "Hercules" at the box office this weekend.

According to Deadline, Universal Pictures' "Lucy" is projected to earn $44 million this weekend. "Hercules" from Paramount Pictures trailed behind at about $29 million.

"Lucy" stars Scarlett Johansson as a woman who gains mental superpowers and seeks revenge against those who've wronged her. (Via Universal Pictures / "Lucy")

So why is "Lucy" coming out on top in the battle of the superhumans? That's the big question for movie buffs this weekend.

The critics sure seem to prefer "Hercules." The movie is actually a whole letter grade higher than "Lucy" on Cinema Score.

And it's not just critics, either. Audiences rank "Hercules" a good deal higher on Rotten Tomatoes, with 66 percent of viewers liking it. "Lucy" only got 52 percent.

So what gives? A media analyst told the Los Angeles Times, “On paper you’d think the Rock would have the advantage on an action film. But ‘Lucy’ had a terrific trailer, and great marketing.”

It could also be that audiences suffered the same preconceptions critics did about "Hercules," expecting it to be, well, awful, only to be somewhat pleasantly surprised. (Via OC Weekly, Pajiba)

But a Forbes writer says it may just be that there's too much emphasis on who won in the first place.

"Scarlett Johansson‘s Lucy and Dwayne Johnson’s Hercules are both hits this weekend. This is also yet another example of why the obsession over rank is foolhardy." He also predicts "Hercules" could gain some traction in the coming weeks.

"Dawn Of The Planet Of The Apes" came in at number three this weekend earning $16 million.