What Really Happened To 'Black Wall Street' In 1921? 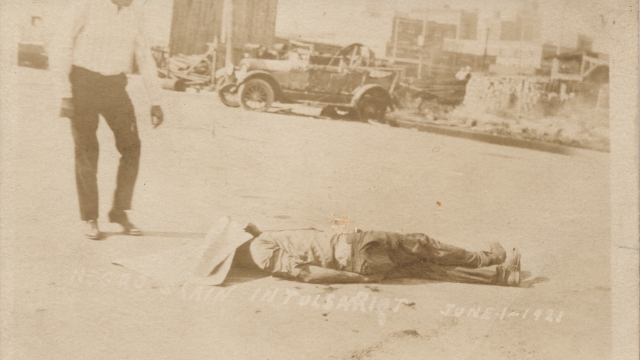 In eighteen hours of raging racism, several hundred people were killed right here where I’m standing. Buildings burned. Bombs dropped from the sky. Bullets and bodies littered the streets, all leading to the destruction of the prosperous area known as Black Wall Street in Tulsa, Oklahoma.

Kristi Williams, the chair of the greater Tulsa African American Affairs Commission, tells us what led a White mob to attack Black Tulsans 100 years ago.

"It's said Dick Roland went into an elevator, tripped, fell on this White lady who was an elevator operator, and she screamed. And then from there, within two hours, an article goes out in the Tulsa Tribune, 'Nab Negro For Attacking Lady on the Elevator,'" Williams said.

“There was a convention here, the Sons of the Confederacy, and one of the comments was made, 'How do you let your n----- live like this?' And so there's so much proof that shows that this was premeditated," Williams told Newsy.

Williams is the descendant of Janie Edwards, who was at a nearby theater when the attack began.

“So my aunt was on a date. ... She was 17 years old and she was in the Dreamland Theater with her date when the massacre happened, and they were able to escape with their lives," Williams explained.

This is where the theater stood before it was set ablaze and bombed. It was one of many buildings destroyed in the 40-block area of Greenwood, also known as Black Wall Street.

What was once a flourishing section of Tulsa of grocery stores, banks, libraries -- all Black-owned -- now lay in ruins. There are many reports from survivors detailing planes diving above houses and businesses.

“When Greenwood was bombed, there had to be some type of chemical to do that bombing. Because if you see these bricks up here, look how hot this had to get to melt,” Williams said.

Today, this is all that remains.

No one was prosecuted for the deaths of the Black Tulsans. As for Roland, the teenager accused of attacking a White girl in the elevator? Williams says all charges were dropped, and after his release he disappeared. Some believe he moved away, never to return. Others say he may have been lynched.

Fast forward to today: Williams says this area should be returned to the descendents’ families.

For now they will continue their fight for reparations for all the pain and suffering their ancestors endured on that fateful day 100 years ago.